The mare’s reproductive tract lies in a horizontal position within the abdominal and pelvic cavities. It includes the vulva, vagina, cervix, uterus, oviducts and ovaries (Figure 1). Changes in the anatomy or interruption in the function of any section can contribute to reproductive problems. 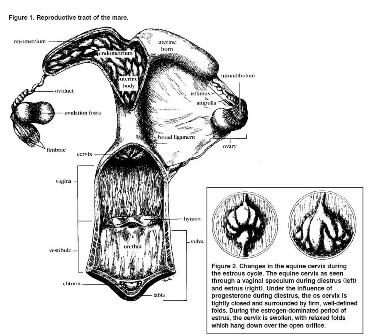 Figure 1: Reproductive Tract of the Mare

The vulva is the exterior opening to the reproductive canal. It consists of the labia, clitoris and the vestibule. The construction of this region is important because it serves to protect the mare from the entrance of air and other contaminants into the vaginal vault.

The vagina consists of a 6- to 8inch long muscular, mucus membrane lined tube which connects the vestibule of the vulva to the cervix. The vaginal tissues must be extremely elastic and distensible to accommodate the penis in breeding and the foal during birth.

Basically a highly distensible muscle, the cervix is approximately 4 inches long and appears as a circle of folded tissue at the anterior surface of the vaginal vault. Its shape and characteristics change significantly in response to the body’s hormonal environment. In response to increased estrogen produced during estrus, the cervix appears pink due to increased vascularity. During this period, it produces thin, watery mucus and is so relaxed that it is often found lying limp on the vaginal floor. This flaccid cervical tone facilitates passage of semen during live cover or breeding instruments with artificial breeding. In contrast, when the cervix is under the influence of progesterone during the diestrous period and pregnancy, it produces a thick, sticky mucus, and is tightly closed and held in the center of the vaginal wall. The physical barrier produced by a healthy cervix provides a major line of defense against uterine contamination and infection. Consequently, damage to this structure can result in significant problems in maintaining fertility (Figure 2).

This is a multi-layered, hollow, Y-shaped organ. The base of the Y is called the uterine body, while the two branches are called the horns. The uterus is suspended within the body cavity by two tough, sheet-like structures called the broad ligaments. Sagging of these ligaments with age, parity or trauma can cause a downward tilting of the uterus. This conformation can predispose the mare to the backwash of urine (urine pooling) into the reproductive tract and its accumulation at the cervix. Urine pooling can cause uterine infection and poor fertility.

The uterus is composed of three distinct layers. The outermost, serous layer is continuous with their broad ligaments. The middle layer, myometrium, consists of two sheets of muscular tissue, one oriented longitudinally and one circularly. The myometrium is responsible for the powerful contractions which expel the foal at birth. The endometrium is the innermost layer. It is a complex mucosal membrane containing a rich blood supply and many glands.

The ultimate function of the uterus is to protect, nourish and provide an environment conducive to the development of the embryo and fetus, and to expel the fetus during birth. Maintaining healthy tissues within the endometrium is crucial for optimal fertility. In fact, endometritis (uterine infection) is a major cause of infertility in mares.

Also known as the Fallopian tubes, the oviducts are small, highly coiled tubes. Each connects the tip of a uterine horn with an ovary. The ovarian end of the oviduct is called the infundibulum. It is enlarged and shaped like a catcher’s mitt with finger-like projections from its end called fimbriae. This design serves to cradle the portion of the ovary from which the ovum (egg) will emerge so that it can be captured and transported down the oviduct to the uterus.

Fertilization of the ovum occurs in the oviduct where it narrows to join the uterus; this is called the isthmus. The oviducts are heavily lined with hair-like projections called cilia. The cilia and the muscular layers lining the oviducts work as a team to transport the ovum down the oviduct and for moving sperm from the opposite direction.

Mare ovaries are unique both in shape and makeup. They are kidney bean-shaped and will have an obvious contrast in size and texture between the breeding and non-breeding seasons. During the breeding season they are functioning and about the size of a tennis ball. The convex side of the ovary is called the hilus and is the area of attachment to the abdominal cavity. The hilus also provides passage for blood vessels and nerves which serve the entire ovary. The concave side of the ovary is called the ovulation fossa and is unique to the mare. This wedge-shaped area is the only portion of the ovary from which an egg may be ovulated. The inner structure of the ovary consists of an outer area called the medulla and an inner part, the cortex. The cortex contains the ova (eggs). When a filly is born, the cortex contains all the eggs she will ever have. The cortex supports the growth and development of the structures on the ovary which help the eggs mature and also secretes hormones that help control the reproductive process.

One of the cortical structures is called the follicle. Each ovum is encased by a single layer of follicular epithelial cells, the primordial follicle. Of the hundreds of thousands of primordial follicles present in the ovary at birth, only a small fraction will ever reach maturity and liberate their ova (egg). Most follicles degenerate or undergo partial development and then disappear. This follicular growth process involves enlargement, development of cellular layers around the follicular wall, accumulation of fluid within the central follicular cavity and production of the hormone estrogen. As the enlarged preovulatory follicle nears maturity, it bulges from the ovary’s surface. This bulge can be felt through the rectal wall when the mare’s ovaries are manually palpated. Ultrasonic images of the preovulatory follicle appear as a black area within the grayish tones of surrounding ovarian tissues. The follicle’s diameter indicates its maturity. Those 35 millimeters or greater are considered capable of ovulating. Another cortical structure, the corpus luteum, forms from the tissues remaining after a follicle ruptures at ovulation. Unlike the follicle, the corpus luteum is solid-cored and secretes the hormone progesterone. This difference in construction can be recognized as a change in texture by an experienced practitioner during rectal palpation or by its ultrasonic image which is echogenic (gray).

During the nonreproductive season of winter, most mares are in a state of reproductive quiescence (hibernation) called anestrus. During this time, they will not respond to the stallion’s attention, their ovaries do not develop any structures and there is minimal ovarian hormone secretion. The situation changes dramatically during spring and summer. As daylight hours increase, ovarian hormonal secretions also increase. The mare will begin to experience a series of estrous cycles. These cycles will repeat themselves at 21- to 23-day intervals until pregnancy occurs or until a point when days shorten and she reverts back into anestrus. Estrous cycles only during a circumscribed portion of the year is termed seasonal polyestrus. One way to circumvent seasonal polyestrus for early breeding is through exposure to artificial light. This concept is discussed in more detail in the reproductive management section below. 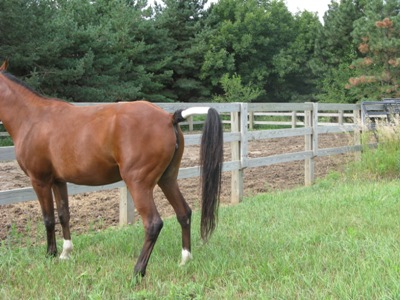 The two different stages of the estrous cycle are generally distinguished by the mare’s behavioral responses to the stallion. Estrus (heat) lasts an average of 5 to 7 days, the longest heat period of any domestic animal. Estrus is characterized by receptivity to the stallion. A mare showing classical estrous behavior will adopt a urination stance – squatting with legs spread apart and tail raised. She will urinate small volumes frequently and expose her clitoris by everting her vulva (winking). If a stallion nears, she may lean into him. Most mares cease estrous behavior within 24 to 48 hours following ovulation. This marks the beginning of the other stage of the cycle, diestrus, which lasts from 14 to 16 days. During diestrus, the mare rejects the stallion with behavior typically seen in the form of tail switching, squealing, striking, biting and/or kicking. These behaviorally defined divisions in the estrous cycle roughly parallel the events which are occurring in the ovary, defined by the endocrine system (hormones).

Lutenizing Hormone (LH) is responsible for stimulating ovulation and supporting the initial stages of corpus luteum development. The pattern of LH secretion in the mare differs from that of other domestic animals. LH is secreted for a prolonged period of time, beginning at the initiation of behavioral estrus, peaks at two days after ovulation and declines during the early luteal phase. Ovulation generally occurs toward the end of estrus (Figure 3). It is important to realize that estrus is a behavioral event while ovulation is a physical event. Although estrus and ovulation normally occur together, ovulation is not dependent upon estrus, nor does estrus ensure ovulation. 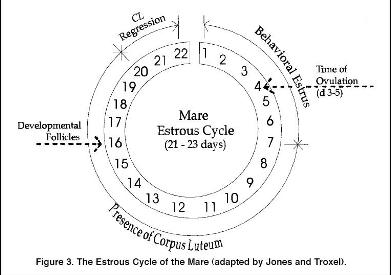 Figure 3: The Estrous Cycle of the Mare (adapted by Jones & Troxel).

The reproductive efficiency of the horse is the lowest of all our domestic animals. The national average for live foals versus mares bred in human-controlled horse breeding is slightly above 50 percent. The mare is perplexingly unique in many of her approaches to reproduction, both behaviorally and physiologically. However, human intervention in the breeding process has certainly played a role in reproductive inefficiency. It is interesting to note that mares in wild (feral) horse populations often reach 80 percent efficiency.

One reason for poor reproductive performance is the fact that few horse breeders select their breeding stock for reproductive efficiency. Stallions and brood mares are selected for their athletic accomplishments, for their pedigree or for their beauty. These reasons constitute the value of the horse today, but everyone should realize the potential problems when reproductive efficiency is not considered. A mare that is valuable by these standards, but is not an efficient producer, will often be kept, coddled and coaxed into conceiving rather than being culled. This is often an expensive process, and if she should have an offspring, her reproductive inefficiency may be passed on to future generations.

Another negative aspect of human management is that we frequently attempt to breed mares outside of their natural reproductive season. Left to their own devices, mares normally mate during the longer, warmer days of spring and summer. Combined with their unusually long 11-month gestation period, Mother Nature has provided them with conditions in which foals will be born when their chance of survival is maximized. Unfortunately, many horse breed registries have decided that the universal birthdate for horses should be January 1 of each year. Therefore, in order to gain a developmental advantage for their foals in competition, many breeders try to have mares foal as close to January 1 as possible. This requires getting mares in foal in February when most are not physiologically capable of reproducing under natural conditions.

An artificial photoperiod may be used to manipulate the mare’s natural cyclicity to the time of year that is normal for her to breed. In order to have an open mare cycling normally in February, she must be exposed to an extended daylight regimen for approximately 60 days prior to that time. The most commonly practiced way to accomplish this is to expose the mare to 16 hours of light (natural and man-made) and 8 hours of darkness beginning in mid to late November. This corresponds to the long days of May through July, when the mare would normally cycle.

Nutritional status of the mare has been shown to play an important role in reproductive cycles. Mares conceive more readily and maintain the pregnancies more consistently if they enter the breeding season in a high level of body condition versus a very thin level. A combination of extended daylight and moderate to fleshy body condition is one of the most practical and beneficial management schemes for enhancing reproductive efficiency in the mare.