Skip to content
Accurate estrus detection in mares is important on any horse breeding farm. One form of estrus detection is teasing. This article presents information on detecting mares in estrus using different teasing methods.

Teasing is a time-consuming activity, but without it mare owners cannot see their mares’ individual behavior in estrus. The person doing the teasing needs to be a good observer of mare behavior and an excellent record keeper. Accurate records are important because each mare behaves differently toward the stallion, and the signs of estrus exhibited vary from mare to mare.

Teasing should be done on a daily basis from the start of the breeding season to the end. During each day’s teasing, enough time must be spent on each mare to be able to observe her behavior carefully. The goal is to identify changes associated with estrus that are typical for that mare. This may mean 5 to 20 minutes, depending on the mare and the method being used.

Although individual behaviors are different, the behavioral changes that a particular mare exhibits during estrus will be fairly consistent from one cycle to the next. The information gathered during teasing can be used during the mare’s subsequent cycles or until she conceives.

Such information includes all changes in the mare’s behavior, whether she is showing signs of estrus or diestrus, and the intensity of any particular signs. In general, mares will be in estrus for five to seven days and in diestrus for 14 to 16 days, with ovulation occurring in the last 24 to 48 hours of estrus. 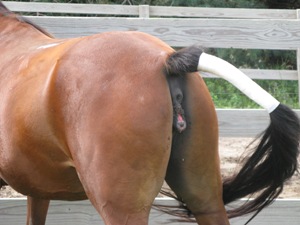 Winking of the vulva

Signs of Estrus in the Mare

One way to quantify the observations made during teasing is to establish a scoring system that can apply to individual mares. Scoring systems also help the observer record consistent information and note progressive changes through estrus and diestrus. There is no perfect scoring system for estrus detection. On most farms, the person in charge of teasing will develop his or her own system. It is important that everyone involved with teasing understand the signs of estrus and the scoring system being used so that staff can report any estrous behavior that they see during daily activities.

In conjunction with the farm veterinarian, it is helpful to establish a score that will be used to determine when mares will be examined by rectal palpation or ultrasonography to determine follicular status and the potential for ovulation. In an artificial insemination program, the teasing program will determine when mares are at day 2 or 3 of estrus, and then the mares can be bred on an every-other-day schedule until they go out of heat.

Scoring systems may consist of the following: 0 — mare shows no signs of receptivity, possibly some aggression toward the stallion—striking, kicking, squealing, etc.

1 — no aggression toward the stallion.

2 — some interest; mare may approach the stallion and exhibit some winking of the vulva and tail raising.

4 — intense interest; turns hindquarters toward the stallion with continuous winking and frequent urination.

Note: Scoring systems may use numerical values that range from 0 to 4 and may include a system of pluses and minuses in addition to the base numbers to indicate the intensity of the estrous behavior.

Due to the individual behavior of mares in estrus, not all mares show all stages of behavioral change. While many will change from a score of 0 or 1 at the start of their estrus and proceed to a 3 or 4 (depending on the system), by the end of estrus some mares will show only minor changes in behavior and never reach a score of 3 or 4.

Of prime importance in teasing mares is to ensure the safety of the horses and their handlers throughout the procedure. When deciding how mares are to be teased, you need to consider the labor required and the number of mares to be teased. The following are some different methods for teasing mares. Regardless of which method managers choose, it is important that facilities be well maintained to prevent injury to the mare, stallion, or horse handlers. In addition, your facilities need to be arranged so that the stallion has a good opportunity to tease the mare.

Teasing mares as individuals provides a better opportunity to determine the mare’s stage of estrus. However, group teasing is frequently used because it is convenient. When mares are teased in a group, the person recording behavior must watch all mares, as some may exhibit signs of estrus without ever approaching the stallion.

The mare is kept in the stall, and the stallion is brought to the barn. It is important to consider these factors about stall teasing:

In designing a stall-teasing facility, it is a good idea to install a window in the stall door or in a side wall that will allow contact between the stallion and the mare. An alternative is to maintain the stallion in a stall and have mares brought to him.

Mares and stallions are brought to an area, and the mare is teased over a partition. There is physical separation to protect horses and handlers. The wall needs to be approximately 4 feet high. This method is labor intensive, as it requires handlers for both horses; however, it can be used for both open and lactating mares.

Teasing over a paddock fence allows you to tease a number of mares at one time with minimal labor. This procedure assumes that mares in estrus will move toward the stallion. The mare manager needs to observe estrous behaviors of all mares, as some mares may show estrus without approaching the stallion. This can be effective with small groups of mares, as observation will be easier. This method is more appropriate for open or barren mares.

Mares are placed in a chute and then teased by the stallion. This allows a mare manager to tease a large number of mares easily, but, as with the paddock method discussed earlier, this method is better for mares without foals. 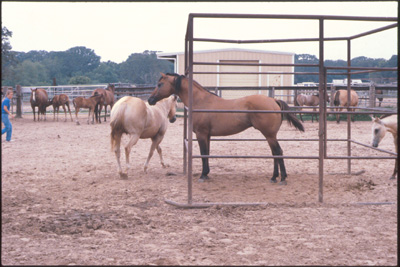 The stallion is put in a pen inside a paddock, and mares are allowed to approach the stallion voluntarily. This may be a more natural method with minimal human interference. It is essential that all mares are observed for signs of estrus, and any mares that do not approach the stallion may need to be caught and led to the stallion for teasing. In group teasing situations, it is difficult to aggressively tease individual mares, and the mare manager must observe all the mares in the group whether they come up to the stallion or not.

Observation of mares when they are being teased individually in a stall or pen must include the time when mares around them are being teased, as some mares may exhibit estrus before or after the stallion has gone by.