Internal parasites are small organisms that live a portion of their life cycle in a host animal. They live in internal organs, body cavities, and tissues while gaining their nutritive source by feeding on the host animal. The horse is affected by many different species of parasites. The nature and extent of damage varies with the parasite.

Parasite infestation causes loss of nutrients or blood from the host, resulting in serious medical problems. Horses heavily burdened with parasites will have a loss of condition due to a depletion of nutrients and blood, decreased growth, and reduced reproductive and athletic performance. 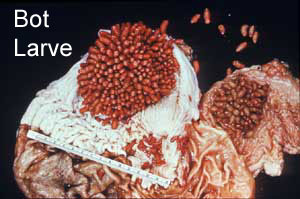 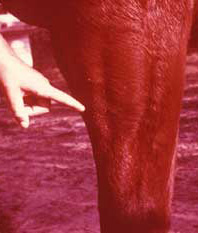 The eggs on the legs are stimulated to hatch by the lip action and warm saliva as the horse licks its leg. Those seen around the nostrils and lips hatch spontaneously in a week to one-and-a-half weeks. Larvae attach and burrow into the tongue and gums of the mouth and incubate there for three weeks. After incubation, they are swallowed and attach to the lining of the stomach. Bots spend approximately nine months attached to the stomach lining before passing out with the manure. These larvae pupate into adult flies. The life cycle depends on the parasite larvae overwintering in the stomach, then passing out in the manure in spring and subsequently developing into adult flies.

The adult flies are active from late spring to the killing frost in the late fall. Botflies have no trace of mouth parts and never feed. They live their adult life cycle on stored energy. They have yellow stripes and resemble a sweat bee.

Botfly larvae probably cause minimal damage to the stomach but can cause damage to the lining of stomach and cause outflow obstruction. However, until these parasites are proven not to cause damage, their control should be considered in any parasite control program.