Basically, the role of a breeding stallion is to impregnate mares. This means producing semen containing adequate quality and numbers of spermatozoa to fertilize a mare’s ovum. Spermatozoa are produced daily in the seminiferous tubules of the stallion’s testes. The testes are housed in the protective covering of the scrotum, which functions to regulate the temperature of the testes. Temperature regulation is important because abnormal rises in temperature — such as those caused by injury or infection — will decrease spermatozoa production. Since stallions need about 57 days to produce mature spermatozoa, injuries and infection can have long-term effects on the breeding season.

Testicular size is a good indicator of sperm production capability; stallions with larger testicles will normally have larger daily spermatozoa output. As such, measurement of scrotal circumference is one of the procedures that veterinarians conduct as part of a breeding soundness exam.

Total scrotal width is smaller in 2- to 3-year-old stallions than in their older counterparts. Stallions that are 2 or 3 years old are expected to have smaller daily sperm outputs and spermatozoa reserves. 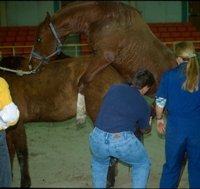 Collection with a jump mare<

Because of this sexual immaturity, 2-year-old stallions should be limited to breeding a small number of mares, if any at all. Otherwise, conception rates will be undesirable because of low spermatozoa numbers, and the stallion may develop a low sex drive from overuse. Even though spermatozoa production begins as early as 12 to 14 months of age in most colts, results of numerous research trials recommend waiting until the stallion is 3 years old before using him as a breeding stallion.

Daily spermatozoa production is also influenced by season. Lowest production, a decline of about 50% from peak values, is expected from September through February. Production of spermatozoa increases as daylight grows longer in March, peaks in May and June, and then declines significantly in July and August. Artificially extending the length of the day by using lighting programs will enhance a stallion’s semen production.

Lighting programs should start around the first of December to advance the breeding season for February and March. The perceived daylight should be lengthened to 16 hours of light per day. Lighting programs must be routinely applied every day. Avoid housing situations that supply 24 hours of light since stallions may respond by decreasing production of semen to levels characteristic of short days.

Stallions will typically remain fertile beyond their 20th year of age. The age that stallions stop producing spermatozoa will vary between stallions. It is important that semen is routinely evaluated on all stallions, especially when using older stallions because of the expected decrease of semen production with age.