Parturition is typically broken down into three stages. Stage I, normally lasting 1 to 4 hours, reflects the initial uterine contractions and final positioning of the foal for delivery. These contractions will make the mare appear nervous and uncomfortable. Typically the mare will exhibit the following behavior.

These indicators are far from infallible and in some mares, the appearance of the water bag (the outer membranes surrounding the foal) may be the first signs of parturition observed.

During this stage, the mare can be prepared for foaling, if desired. This could include washing the mare’s vulva and udder with warm water and wrapping her tail with a clean bandage. If a veterinarian is readily accessible, this is a good time to notify them of the approaching parturition so they can be prepared in the event of any problems. 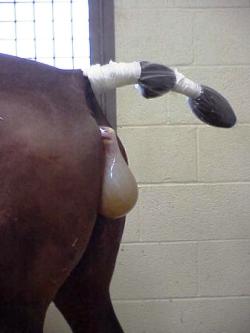 End of Stage One

Stage II is the most critical time, as this is when the foal actually appears. If foaling is proceeding normally, the mare should be left on her own. What is normal? This second stage, hard labor and foal delivery, is usually completed in 10 to 30 minutes. Close observation, without interference unless absolutely necessary, is important throughout this stage. Some mares object to assistance during this time. A viewing window or video camera system out of the mare’s sight is preferred to avoid disturbing the parturition process.

The mare will experience heavy abdominal contractions and lie flat on her side. Her water bag will appear and should break on its own during the first part of stage II.

Although dystocia (foaling difficulty) is uncommon in mares (<10%), it is important the foaling attendant be familiar with both normal and abnormal foal presentations. In a normal presentation, both front feet with heels down will appear first, and usually one foot will be slightly ahead of the other. The feet are followed by the nose and head resting between the knees; the back of the foal is toward the back of the mare. If this is not what is observed, call a veterinarian immediately. The foal could suffocate if birth is delayed. If the foal is delivered, except for the hips and rear legs, gently pulling in a downward direction toward the mare’s heels will usually relieve this “hip lock”.

Following birth, the mare may rest, allowing the foals hind legs to remain in the birth canal for a period of time before they are pushed out. Once the foal is born, patience is critical. The inexperienced horse person has a tendency to rush into the stall, causing the mare to stand and prematurely rupture the umbilical cord. It is important to allow the mare to lie as long as possible to prevent early cord rupture, as the foal receives several pints of blood via the umbilicus if left undisturbed. Stage II ends following birth when the umbilical cord is broken as the mare stands or foal struggles.

Once the cord is broken, do not tie it off with sutures unless the foal is bleeding excessively. To avoid infection, dip the stump of the umbilical cord in 7 percent iodine solution. Repeat the process several times during the first few days of life. This will help prevent bacteria invasion into the body via the navel stump (navel-ill) which can lead to serious complications, such as neonatal septicemia and septic arthritis. 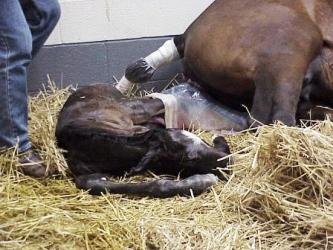 The final stage of parturition, Stage III, is the delivery of the placenta (afterbirth). These membranes, which surround the foal during gestation, should be expelled 3 to 4 hours after delivery. Once expelled, the placenta should be examined to determine if it is intact or if any portions may have been detached. Placenta retention can be a problem, leading to uterine infection (endometritis) and/or laminitis (founder). Under no circumstances should the placenta be pulled from the mare! Typically, the mare will stand with the placenta partially expelled while the foal struggles to stand and nurse. The foal’s nursing helps stimulate uterine contractions, aiding in placenta release. Pulling the placenta could tear or prolapse the uterus or result in contamination of the uterus with pieces of torn placenta. In cases of retained placenta, treatment should be done under veterinarian supervision. This treatment typically includes administration of oxytocin to stimulate uterine contractions, and antibiotics and uterning infusion may be required. Mares which had a retained placenta may be poor candidates to be bred on foal heat.

After parturition, mares may experience some mild to moderate colic as her uterus and reproductive tract contracts and heals. During the first week postpartum, a reddish-brown discharge may be present. This discharge is normal. If a white discharge develops, however, this indicates a uterine infections and a veterinarian should be consulted for treatment. 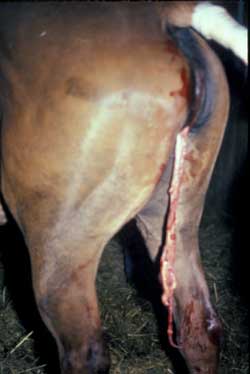