Skip to content
As reproductive technologies increase, the use of cooled or processed stallion semen is becoming more prominent. However use of processed semen requires certain management procedures. This article discusses the process of using cooled stallion semen, the potential problems, and certain breed restrictions.
Using cooled semen in a breeding program is becoming a much more viable option for many horse producers. It does involve more coordination and organization between mare owner, stallion manager and veterinarian. However, it is a fairly simple method to reduce the costs, yet breed to more superior stallions. If procedures are correct, and mares are managed properly, success rates should be the same as if bred in a traditional artificial insemination program.

Once the mare owner has determined a shipment of semen is needed, the stallion manager oversees the processing of the semen. It is critical the stallion be collected, semen processed, and placed in the cooling container within 15 minutes of collection. Unextended semen, maintained at it’s collection temperature (99 F) for over 15 minutes results in markedly reduced sperm motility at 24 hours. Therefore, the semen must be collected, filtered, analyzed for volume, motility, and concentration, mixed with extender, and placed in the shipping container within 15 minutes. Use of an extender with semen processed for storage and transport is critical to its survivability. Extender provides nutrients to the sperm cells and contains antibiotics to destroy harmful bacteria. Because of reduced viability, mares should be inseminated with 1 to 2 billion sperm cells and a volume of not more than 40ml of semen. If a stallion has a sufficient concentration, the ejaculate may be split and several shipments obtained from a single collection. Additionally, if there are mares to be bred on-the-farm, collections with sufficient concentrations may be split for on-the-farm use and shipment. 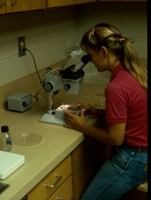 Once packaged, the container is sent via commercial carrier. The most common routes are an overnight mail service (UPS, Federal Express). Arrangements can be made with these companies for door-to-door service. Most commercial airlines will accept the shipping containers as unaccompanied baggage on a designated flight. However, containers must be taken to, and picked-up from the airport. Because most overnight services do not operate on weekends, commercial airlines are a viable option. 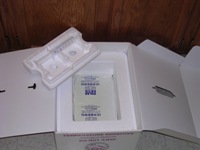 Once the container is received at the location of the mare, it should be kept in a safe place, and DO NOT OPEN until ready to inseminate the mare! Anyone skilled in equine artificial insemination has the techniques to inseminate with cooled semen. The mare should be prepared for insemination, semen removed from the container, swirled to mix, drawn into a slightly warm syringe, and inseminated as soon as possible. The semen need not be warmed prior to being placed into the mare as she provides the most desirable environment and best warmer for the semen. Following insemination, motility of the semen must be evaluated. A drop of semen should be placed on a warm slide (99 F) and examined under a microscope for forward motility. The shipping container must then be returned to the stallion farm for future use.

The most common pitfall in failure to obtain pregnancy through cooled semen is associated with the mare’s reproductive cycle. Various aspect such as failure to recognize her heat cycle, or missing her expected ovulation by more than 24 hours will often result in an open mare. Owners should realize more than one semen shipment may be required. One study reported overall conception rate of 91 percent over three heat cycles (n=55). However, the first-cycle conception rate was only 65 percent with an average of 1.7 inseminations per cycle and an average of 1.8 cycles per conception.

Handling semen in a lab.

Correct handling of semen is of utmost importance. The effects of subtle errors in semen handling are magnified when semen is stored, rather than used immediately following collection. There is the potential of damage to the spermatozoa during the collection, processing and shipment. Semen must be handled from collection to insemination in such a manner as to not shock or damage the sperm. If collection or storage devices are contaminated by bacteria, chemicals, or even soap residue, the survivability of the sperm cells can be severely diminished. Proper temperature control of semen prior to cooling and prior to insemination is crucial. For example, if semen is initially mixed with extender which is too cool or too warm, damage will occur. Furthermore, the stallion manager must be conscientious enough to follow the correct packaging and cooling instructions.

Breed association restrictions are continually changing. Horse breeders interested in pursuing use of cooled semen should contact their breed association for the most current guidelines.