The signs of impending parturition are about as variable as gestation length. Although there is a tremendous amount of variation among mares, many individuals do repeat their foaling behavior year after year. Therefore, it is recommended to keep accurate records on each mare to aid future deliveries. 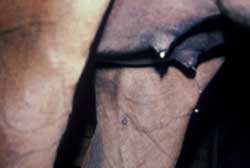 The classical signs of approaching parturition include udder development beginning 2 to 6 weeks before foaling, then milk let down into the teats (teat distension) 4-6 days prior to parturition. Due to oozing out of some of the colostrum, the ends of the teats become covered over and the mare is said to be “waxing”, which occurs 1-2 days before foaling. At this time, some mares will have occasional dripping or streaming of colostrum. It this streaming is continuous, the colostrum should be collected and stored for possible use with the newborn foal. In addition to changes associated with the mammary gland, muscular relaxation in the pelvic region occurs progressively during the last 7-14 days of gestation and the mare’s vulva begins to relax during the final days of gestation.

Many mares will show these “classical” signs of approaching parturition and make it fairly easy to determine their foaling time. On the other hand some mares will break all the rules and these signs may not be present, or may appear at varied times.

For mares with unknown foaling history, or for mares which are unpredictable for some reason, there is help available. Several commercial kits to estimate foaling times have recently come onto the market. These test kits are based on the fact that in most mares, calcium and magnesium concentrations in prepartum mammary secretion rise progressively during the latter portion of gestation to the time of foaling. A majority of mares show a significant rise in calcium and magnesium concentration just prior to parturition. This allows foaling attendants to estimate time of foaling within 12-24 hours.

The kits have been most useful in determining when the mare will not foal. In other words, if the test shows no changes in the calcium concentration, the mare probably will not foal within the next 24 hours, and thus would not need to be watched as closely. When a rise in calcium is indicated, the foaling attendant could then direct more attention to he mare which is close to foaling.

These test kits, available from veterinarians, are simple to use and fairly inexpensive (.25 to $1.00 per test). All kits require taking 1-4cc of milk daily once the classical signs of approaching parturition are observed. Generally, samples should be taken for approximately 10 days. Recent research has shown daily samples collected during the early evening hours were adequate for detecting the prepartum calcium rise.

With the great variability in determining the foaling time in mares, the question of labor induction frequently arises. Although it is possible to induce parturition in mares, it is not recommended. Only in extreme situations, such as a life threatening condition to the mare or foal or some type of medical emergency, is parturition induction recommended. If this procedure is used, it should be done under supervision of an experienced veterinarian. A mare improperly induced could result in severe complications to both the mare and foal.

If conditions warrant a mare to have labor induced, she must only be induced once certain criteria are met. First, the mare must have reached a gestation lenth of 330 days. Substantial mammary development with colostrum present is critical. Additionally, the cervix must be soft and dilated the width of one to two fingers. Finally, the foal should be in the correct position for a “normal” presentation. If these conditions are not in place, the mare may not be close enough to parturition for a safe induction.

There are various methods your veterinarian may choose to induce labor. It is important to remember that induction of parturition in mares should not be practiced routinely, due to the risks involved to both mare and foal. 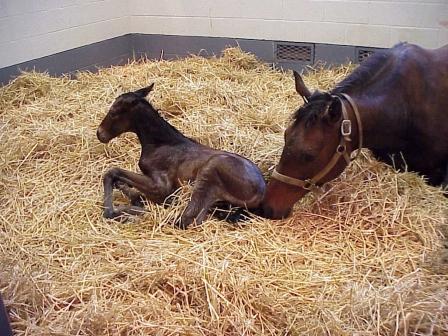