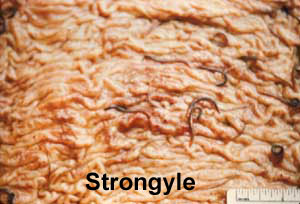 Strongyles are grouped as either large or small. The three primary species of large strongyles that infect the horse are:

The adult form of all strongyles (large or small) live in the large intestine. The larvae of large strongyles migrate through various parts of the body. Strongylus vulgaris, the bloodworm, will burrow into and migrate in the walls of the arteries that are the primary blood supplier to the small and large intestines. The other two large strongyles (Strongylus endentatus and Strongylus equinus) have similar life cycles, but their larval migration is primarily through the liver.