There are several management tools used to bring about the onset of the breeding season or to alter the estrous cycle itself. The most reliable method used to induce the ovulatory season is the use of artificial lights to alter the mare’s perception of day length. The easiest light management program is to use lights at the end of the day to extend the perceived day length (or photoperiod) to 16 hours. This practice entails turning on an artificial light source 30 minutes before sundown. The light source should be turned on to supply enough additional light to produce a total 16 hours of daylight (natural and artificial). There is a lag period of 60 to 90 days between the onset of daylight extension and first ovulation. Therefore, if February-March ovulations are desired, mares should be started on the lighting program before December 15.

Perception of day length must be constant from day to day; the use of automatic timers is of benefit. Also, using too much light can cause adverse effects. Mares that are exposed to continuous light will not cycle properly. Light intensity should be a minimum of two foot-candles, which is comparable to one 200-watt bulb for a 12 x 12-foot stall. Floodlights can be used on outside pens. A general rule is that lighting is sufficient if a newspaper can be easily read in any corner of the stall or pen. One side note is that mares in light inducement programs will also shed hair, so those housed outside will need protection from bad weather.

While the use of artificial lights has the greatest benefit on dry or open mares, recent studies have shown that early foaling mares will also respond to added light. Gestation lengths have been decreased by as much as 10 days when using lights for open mares, with no effect on foal weight and size. Artificial lighting enhances proper cycling in these mares after foaling.

Artificially advancing the ovulatory season in open and bred mares will help maintain a yearly foaling interval, produce older foals at the breed association’s January 1 universal birth date, and make better use of available semen across the entire breeding season. 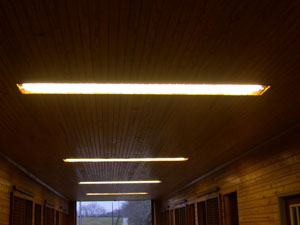 Several pharmaceutical products are used in the horse industry to maximize conception rates once mares are cycling. Prostaglandin is responsible for regression of the corpus luteum during normal cycles. Mares can be “short cycled” by treatment with protaglandin F2a or one of its synthetic analogues, if there is a viable corpus luteum present. Prostaglandins are most effective when used on days 6 through 8 after ovulation, potentially reducing the interval from one heat to the next by as much as eight days. Prostaglandin treatment is most often used on mares that were not bred on the previous cycle and that have a viable corpus luteum suppressing the estrous cycle. Use of prostaglandin should be under the direct supervision of a licensed veterinarian, both for determination of usage and because of occasional adverse side effects. Pregnant women should avoid contact with the drug because it has been proven to cause abortions.

Progesterone can be used to suppress heat during transition into the ovulatory season in mares that have histories of long and erratic estrous cycles during this time. Progesterone has also been used with less consistent results to maintain pregnancy in mares with abortion history. One management practice that enhance normal estrus cycles is to place mares on exogenous progesterone for 10 to 15 days. Once removed from progesterone, most mares will return to estrus within 3 to 4 days and ovulate 9 to 10 days following progesterone withdrawal. For this practice to work, mares must have sufficient activity on their ovaries (several follicles of at least 20-25mm or larger). Most commonly, progesterone is given orally, marketed under the name – Regumate (altrenogest). Oral progestone is given at a dosage of .044mg/kg body weight or approximately 1 ml per 110 pounds of body weight.

Another hormone that has been used with some success in breeding management is Human Chorionic Gonadotropin (HCG). HCG aids in stimulating ovulation in mares. It is most often given at the same time the mare is bred. HCG will normally lead to ovulation of a mature follicle within 48 hours, aiding in appointment breeding and helping mares that tend to develop a follicle and fail to ovulate. Estrogen, gonadotropin releasing hormone (GnRH), and FSH have been used to alter reproductive function. Results of the use of these three hormones, by themselves, are usually poor when compared to their use in other large animal species.