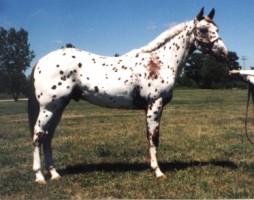 Appaloosas were Spanish horses that were managed by the Nez Perce Indians. The term Appaloosa was first used to describe these spotted horses of the Palouse region around the late 1800s. The Palouse, or Palouse Country, is the area of Washington and Idaho drained by the Palouse River. Early white settlers referred to the spotted horse of the area as a Palouse horse. Over time the ‘a’ and Palouse were slurred together to first form the name Apalousey and later Appaloosa.

The Appaloosa (color breed/stock type/hunter type) has six basic color patterns and must have white around the eyes like humans;

An Appaloosa is considered to be short-coupled, of stock horse type, and standing 14.2 to 15.2 hands on the average. Appaloosas are vibrant in color and are best suited for riding, ranch work, rodeos, showing, parades, and circus acts.