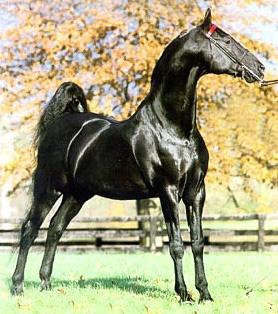 ‎The American Saddlebred (saddle type) was developed in Kentucky and influenced by the Narraganset Pacer, Morgan, and Thoroughbred.

Of all the foundation sires of the American Saddlebred, Denmark, foaled in 1839, was the most influential Thoroughbred sire to impact the Saddlebred breed. In 1851, Gaines Denmark was foaled and brought increased popularity and fame to the Saddlebred breed during the Civil War.

The American Saddlebred has an elegant long neck that comes high out of its sloping shoulder. It is flat over its croup and has a high tail set. Most American Saddlebreds stand 15 to 16 hands tall and are of solid coat colors, such as black, brown, bay, gray, or chestnut. The Saddlebred’s travel is exemplified by extreme animation and style.

A unique quality of the American Saddlebred is its suitability for show and pleasure riding, along with the ability to travel three- or five-gaited.