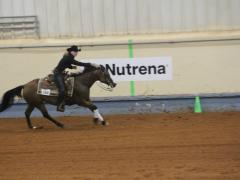 Exhibitors in a reining class individually perform a specified pattern.

The generally accepted guidelines for reining set forth by the National Reining Horse Association are as follows:

Below is a video of Shawn Flarida’s NRBC (National Reining Breeders Cup) 2011 Open Classic Champion run!, which is an excellent example of what to look for in a reining horse.

During the performance of the specified pattern, exhibitors are required to perform specific maneuvers while striving to achieve the level of performance described above. These maneuvers include:

Circles are performed in a specified location of the arena maintaining a common center point. There should be a distinct difference between the size and speed of the large fast circles and small slow circles. During circles, the horse should exhibit control and a willingness to be guided by the rider.

Lead changes are the front and hind legs’ change of leads performed at the canter during a change of direction in the pattern. The horse should exhibit control and precision when changing leads.

Spins are consecutive 360-degree turns, ideally with the inside hind leg remaining stationary. While remaining in one location, the horse should exhibit cadence, smoothness, and speed during spins.

Sliding stops are the change of speed from a canter to a stop position while traveling in a straight line. During sliding stops, the horse should move freely with its front legs while the hind legs are positioned under the body, maintaining contact with the ground during the slide.

Rollbacks are the 180-degree turn over the hocks which are executed as a fluid continuation of the movement from a sliding stop. Upon completion of a rollback, the horse should continue the motion directly into a canter.

The backup is the backward or reverse movement of the horse, executed swiftly in a straight line. 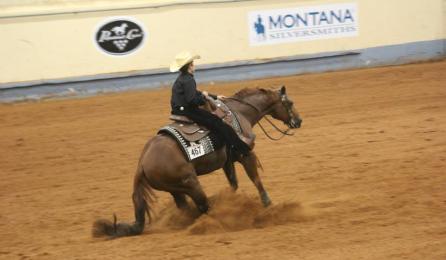 Scoring is 0 to infinity, with 70 being an average score.

Each maneuver indicated in the pattern receives a maneuver score of +1½ to -1½ with half point increments and 0 indicating an average maneuver. The following are the general guidelines used to determine appropriate maneuver scores: