Several competitive events involve horses jumping over an obstacle or a series of obstacles. Although they all involve jumping, there are specific differences among the disciplines. These classes are also offered either at breed shows (AQHA, APHA, etc.) or at discipline-based shows (USEF, USEA, USHJA). 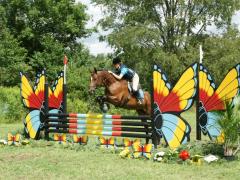 Show jumping involves three primary types of obstacles, depending on the level of competition. The jumps are brightly colored and may include a wide variety of creative designs, everything from butterflies and killer whales to plain poles and gates. Jump courses are made up of a combination of jump types, with crossrails, verticals, oxers, and water jumps the most commonly seen in show jumping. 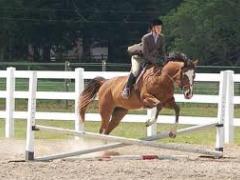 Crossrails are an introductory jump and are primarily used in training and at lower levels of competition. Poles are set with one end in the cup and the other end on the ground. The rails can be moved up, but one end always remains on the ground for crossrails.

A vertical is any jump that has only height and no width and is the most common type of jump in a competition. This picture shows a typical vertical made of jump poles, but a vertical can also include gates, walls, and other obstacles as long as the jump does not have added width. 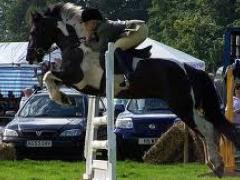 An oxer is basically two verticals (three verticals are called a “triple bar”) that are put together to make a single jumping effort. Oxers increase in difficulty by increasing height, width, or both. The oxer can be either of these types: 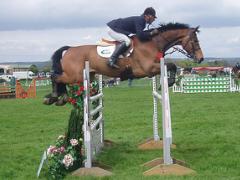 Water jumps include both a height and a width component. If the horse touches any part of the water, it counts as a fault, equivalent to knocking down a rail on another kind of jump. 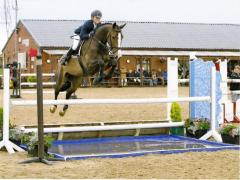 The horses are timed from a start and finish line, and a final score is obtained by combining the number of jumping faults (4 points for every jump knocked down), number of disobedience faults (4 points for any disobedience listed below), and time faults (penalty points for going longer than the posted time). If horses have the same score, the horse with the faster time will win. If more than one horse has a “double clear” and has no jumping faults and no time faults, there will be a “jump off” in which they will jump a second course (going the same direction, but usually with fewer and higher jumps) where the horse with the lowest number of points wins. However, in the jump off, if there is more than one clean round, the fastest time wins.