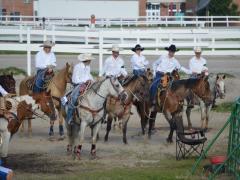 The purpose of a roping class is to provide an opportunity for the horse to demonstrate and be judged on its natural talent and ability, its willingness to perform, and the level of training that makes it suitable for competitive timed roping events outside of the arena. The rope horse will be evaluated through a series of individually judged maneuvers that, when combined, result in a score that most accurately reflects its ability to allow its rider to catch and handle a calf and/or steer most efficiently and effectively.

The roper may throw only two loops and must be done within the two-minute time limit, which is from the time the calf leaves the chute until the roper signals the time is complete. Even when the time limit is complete, the horse will continue to be judged until the rider has mounted the horse and ridden forward. 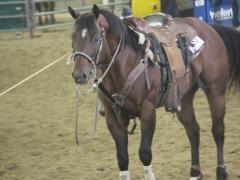 On a 0 to 100 basis, an average performance is 70. Each maneuver is scored on a +3 or -3, in ½-point increments. The tie-down roping horse will be judged on four different maneuvers: 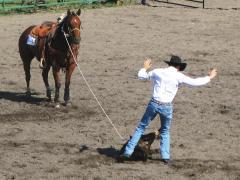 Faults are to be scored according to severity.

The heading horse and the heeling horse are to be entered and scored individually, not as a team.

The horse will be judged on four different maneuvers: 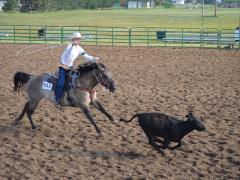 Faults are scored according to severity.

Faults are to be scored according to severity.