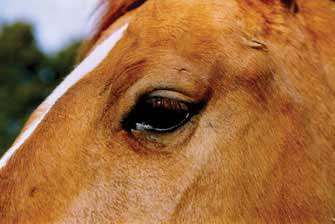 Horses (as well as some other animals such as sheep and cattle) have a much wider visual field than do dogs or coyotes. Horses can scan their entire surroundings with only slight head movement.

The size of the pupil improves the ability of a horse to pick up movement. The large size provides the effect of a built-in wide-angle lens, which is further enhanced by the placement of the visual receptors in the retina. The total effect is better peripheral (side) vision. The horse can see movement well. However, it is believed that while the horse sees practically all the way around its body, the image is not as clearly defined as what humans see, especially within 4 feet.

A question often asked is whether or not horses can see color. It was first thought that both horses and cattle were color blind. If horses can distinguish colors, it is unlikely that their ability to see color is equal to that of other species, such as humans.