Horses have a highly developed sense of smell, and they use their ability to distinguish different odors in their everyday lives. Horses use smell to identify other horses. A mare uses smell to pick out her foal from others in a group. Smell is also used during mating. The stallion checks mares to detect those in heat (estrus). The classic head-raised, lip-curling behavior of the stallion as he recognizes the smell of females is called the Flehmen response. This trait, which may be occasionally observed in females, is due to a special organ (vomeronasal organ) above the roof of the mouth. 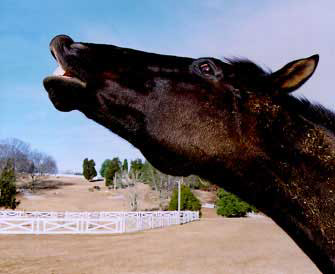 Some people believe that horses can sense when a person is afraid — which is probably true — and this is often referred to as horses’ ability to “smell fear.” It is possible that the horse can smell some small change in the fearful human, but it is equally likely that the horse can detect human nervousness via other senses.

Horses will use smell to distinguish between fresh and spoiled feed. The next time you are tempted to dispose of moldy feed or hay by feeding it to a horse, try smelling it yourself. Then remember, if it smells bad to you, it may smell worse to the horse. (It is not advisable to feed moldy or spoiled hay to horses, because it can lead to digestive problems.)