Animals, like humans, have five basic senses: vision, audition (hearing), olfaction (smell), gustation (taste), and touch. The senses are an important part of what makes horses behaviorally distinct. They are the tools that a horse uses to interact with its environment. As such, the senses can be considered behavior starters. We do not completely understand the horse senses, but what we have learned has greatly added to our knowledge of horses. A review of this information can be helpful in understanding horses.

When we work with horses, it is beneficial to try to understand their sense of the environment. In other words, we try to understand how they might see, hear, taste, smell, and feel their surroundings. As we learn more about what motivates horses and how they perceive various stimuli, we can do a better job of working with them and shaping their behaviors. 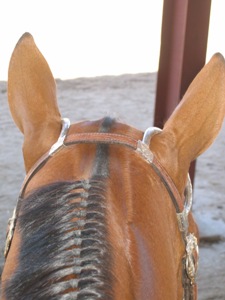 A horse’s hearing is much keener than ours. They use their hearing for three primary functions: to detect sounds, to determine the location of the sound, and to provide sensory information that allows the horse to recognize the identity of these sounds. Horses can hear low to very high frequency sound, in the range of 14 Hz to 25 kHz (human range = 20 Hz to 20 kHz). Horses’ ears can move 180 degrees using 10 different muscles (compared to three muscles for the human ear) and are able to single out a specific area to listen to. This allows the horse to orient itself toward the sounds to be able to determine what is making the noise.

A horse’s hearing is similar in range and tone to that of humans. Horses’ ears can rotate about 180 degrees, however. This unique anatomical feature allows horses to focus on the direction from which the sound is coming, isolate it, and run the other way.

Horses can respond to a training command given at a very low volume. We don’t need to shout to be heard. Also, horses are very sensitive to the tone of voice. We need to use a confident tone and avoid overly emotional tones such as shrill, high pitches. We also want to give voice commands in a way that gives the horse tools to distinguish them. For example, if you are longeing a horse at a walk and want to perform an upward transition to a trot, you may want to divide the word “trot” into two syllables and raise your voice an octave as you say “to – rot”! When performing the downward transition from the trot to the walk, you would lower your voice an octave on the second syllable of “wa – alk.”

The horse’s range of smell is more acute than that of humans but less sensitive than that of dogs. Horses use their sense of smell to identify other horses, people, predators and feedstuffs, just to name a few examples. Horses can identify medicine in feed even when we attempt to mask it in tasty treats. Horses may have a seemingly irrational fear of some smells, such as strong odors associated with pigs.

Horses prefer sweet and salty tastes, so they will usually meet their requirement of salt if it is provided in a block form. You can use molasses to entice horses to eat crushed medicine. After a period of time, however, don’t be surprised if they wise up and refuse that medicine treat!

Scientific research has proven that horses don’t possess nutritional wisdom beyond eating when they are hungry and drinking when they are thirsty. If you were to give them a smorgasbord of ingredients, they are not able to choose the healthiest ingredients and balance their own diets. However, they are selective grazers out in the pasture when there is edible forage from which to select. They will usually avoid toxic plants if alternative plants are available. Their choices are based on taste and texture. They will also graze down the young plants and ignore the more mature plants, if given the chance. We can use rotational grazing plans, mowing, and pasture dragging to keep horses grazing in a more uniform and efficient pattern.

Horses’ tactile sensation, or touch, is extremely acute. Their entire body is as sensitive as our fingertips. They can feel a fly on a single hair. 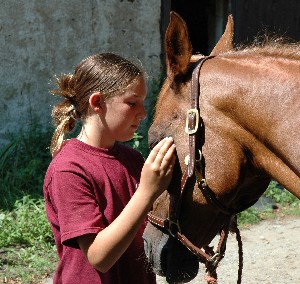 From petting a horse out in the pasture to performing a difficult riding maneuver, we use the horse’s sense of touch as the primary tool of communication between humans and horses, including almost every aspect of the training process. They can feel any movement of the rider, and can distinguish a subtle weight shift or a light movement of the reins.

We utilize the areas where the horse is most sensitive: the head — including the poll (the bridge of the nose and mouth), the back, and the sides. Through training, we desensitize horses to some degree so that they won’t overreact to touch. However, we can also desensitize a horse to the point that it will totally ignore touch. If a horse is scared or in pain, it will seek ways to escape the pressure it is feeling. It is extremely important to use the sense of touch to create a willing partnership between horse and human rather than a servitude based on fear.

It is very important to understand how the horses eyes work. They see primarily by monocular vision, meaning that they see different things out of each eye. Binocular vision (seeing the same out of both eyes) is used on a limited basis and primarily when the horse is looking straight ahead. Furthermore, there are two blind spots, directly in front of the forehead and directly to the rear. Therefore, horses will turn the head from side to side to increase the field of vision. 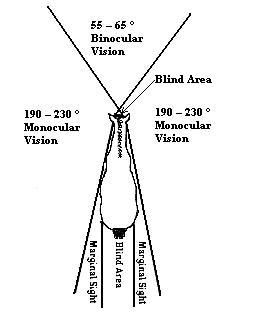 A horse’s vision is its primary detector of danger. Even though horses have poor color vision, they can differentiate blue and red hues from gray ones. However, they have trouble differentiating yellow and green from gray. Horses also have poor depth perception when only using one eye. They can’t tell a trailer from an endless tunnel or a mud puddle from a bottomless lagoon. Their perception is improved by about five times when using both eyes (binocular vision). They can instantly change their focus from near to far objects. This is why horses cock their head in different ways to see close versus distant objects. Horses have an acute ability to detect movement. This is why a horse is much flightier on windy days; things that are normally stationary are now moving and perceived as a potential threat. Horses are able to see fairly well at night; however, the contrast sensitivity is less than that of a cat.