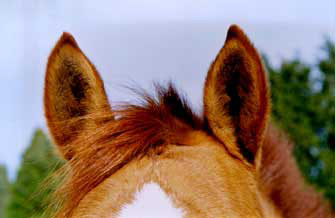 A horse’s hearing is much keener than ours. They use their hearing for three primary functions: to detect sounds, to determine the location of the sound, and to provide sensory information that allows the horse to recognize the identity of these sounds. Horses can hear low to very high frequency sound, in the range of 14 Hz to 25 kHz (human range = 20 Hz to 20 kHz). Horses’ ears can move 180 degrees using 10 different muscles (compared to three muscles for the human ear) and are able to single out a specific area to listen to. This allows the horse to orient itself toward the sounds to be able to determine what is making the noise.

A horse’s hearing is similar in range and tone to that of humans. Horses’ ears can rotate about 180 degrees, however. This unique anatomical feature allows horses to focus on the direction from which the sound is coming, isolate it, and run the other way.

Horses can respond to a training command given at a very low volume. We don’t need to shout to be heard. Also, horses are very sensitive to the tone of voice. We need to use a confident tone and avoid overly emotional tones such as shrill, high pitches. We also want to give voice commands in a way that gives the horse tools to distinguish them. For example, if you are longeing a horse at a walk and want to perform an upward transition to a trot, you may want to divide the word “trot” into two syllables and raise your voice an octave as you say “to – rot”! When performing the downward transition from the trot to the walk, you would lower your voice an octave on the second syllable of “wa – alk.” 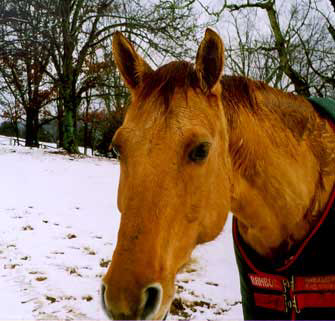