Horse owners do have some options for
disposal of an equine carcass. Options for horse
carcasses vary by locality and include burial, composting,
rendering and cremation/incineration. 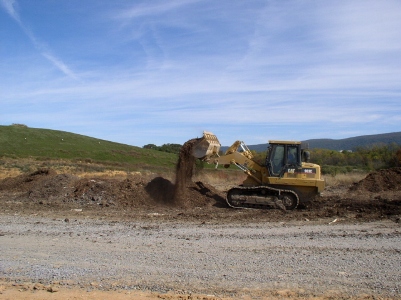 Regulations on horse burial vary from state to state, and within states, from locality to locality. Many jurisdictions require the burial site be no fewer than 100 yards from wells, streams, and other water sources; and in some locales, it is illegal to bury a chemically euthanized horse. Generally, a trench 7-feet wide and 9-feet deep is sufficient, with at least 3-4 feet of dirt covering the animals remains. In order to accomplish this, one needs access to a backhoe, which can be rented for a fee between $250-$500, depending on location.

Landfills are an alternative to burial. Keep in mind that not all municipal landfills accept animal carcasses, and those that do, do not necessarily take horses. Additionally, some landfills that accept horse carcasses will not take the remains of a chemically euthanized animal. Costs can be higher but tend to be between $80-$150.

While incineration/cremation of a horse carcass is very expensive, it is one of the most environmentally friendly solutions to body disposal. Cremating a 1,000- pound horse can cost between $600-$1000, depending on location and current price of propane. The incinerators are regulated by strict environmental laws at both the state and federal level, thus providing control over air pollution. As the ashes pose no environmental threat, they may be returned to the owner and buried or sent to a landfill.

Rendering is an effective, affordable and environmentally safe method of livestock carcass disposal. Carcasses are “cooked” to destroy pathogens and produce end products such as bone meal that can be used in animal feeds. Rendering companies will normally pick up the remains and charge a fee between $75-$200, again depending on location. Only 50 percent of the states have rendering plants, the majority of which are concentrated in the Midwest.

Composting, a controlled, sanitary decomposition of organic materials by bacteria, has recently gained popularity. It is performed in covered trenches or piles that must be located away from runoff and drinking water supplies to avoid contamination. The combination of vegetative material and moisture results in temperatures reaching at least 130F which, over the course of time, kills most pathogenic viruses and bacteria. It takes approximately 9-10 months to compost an intact horse carcass; and the end product is a spongy, odorless substance that can be used for soil supplementation. Livestock composting is legal in every state except California, but even in states where the practice is permitted it can be limited by carcass weight. Information on composting and its availability in certain areas may be obtained from a state’s Department of Agriculture.

First developed in 1992, the biodigester is a machine similar to a pressure cooker. Using alkaline hydrolysis, biodigesters rapidly kill any potential harmful waste in the carcass. The machine can turn a 1,000-pound horse carcass into an aqueous solution of peptides, amino acids, sugars, soaps and powdered bone, all free of harmful pathogens. The remains are, in fact, sterile and pose no environmental hazards and can therefore be disposed of at a local landfill or be used as fertilizer. This method is becoming a popular way of carcass disposal at veterinary colleges and industrial research facilities. The veterinary colleges at the University of Florida, Texas A&M University, Colorado State University and the University of Minnesota are just some schools that own and use biodigesters. The U.S. Department of Agriculture also owns a machine. While the initial purchase price is costly, the operating costs offer significant savings over time and are more environmentally friendly than using commercial incinerators. For example, the Wisconsin Veterinary Diagnostic Laboratory purchased a biodigester for $900,000 but estimates that the facility can dispose of a carcass for 25-cents per pound, as opposed to 75-cents per pound using an incinerator.