Role of the Stallion in Reproduction

The stallion must deliver healthy spermatozoa (which contain his genetic contribution) into the vagina of the mare at time of service. He should have enough libido (sex drive) to tease and service frequently and be able to sustain production of healthy spermatozoa throughout the breeding season (Table 1). 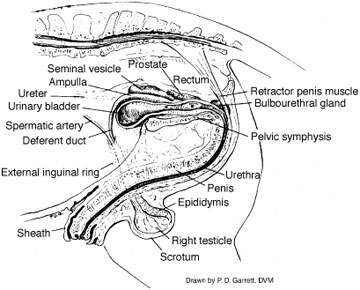 Figure 1.-Reproductive organs of the stallion

The male reproductive system (Figure 1.) consists of two testes, three accessory sex glands and a series of tubules through which spermatozoa are transported to the female reproductive tract.

Spermatozoa are produced in small coiled seminiferous tubules in the testes that can be extended 400 to 500 feet in length. Since these developing cells cannot live at body temperature, heat regulation of the testes is critical. Scrotal muscles contract and expand as temperatures change in the normal process of temperature regulation. “Ridgling” or cryptorchid horses are sterile in the testis maintained in the body cavity, but are fertile in the suspended testis. Since this condition is hereditary, it should not be propagated, as castration of a cryptorchid horse is usually a serious operation.

The accessory sex glands are the seminal vesicles, prostate and bulbourethral gland. These furnish alkaline fluid secretions that neutralize the urethra, through which spermatozoa are transported from the epididymis to the end of the male genitalia glans penis.

Because of a long estrous cycle and short life span of the spermatozoa and egg, it is not uncommon to have a lower than 50 percent conception rate.

Care and use of a healthy stallion

Yearlings should not be used for breeding. Two-year-olds may settle 10 mares; 3-year-olds, 30; and mature stallions, 50 mares when hand-mated. About half this number can be pasture-mated. A short breeding season will reduce the number, and sexual individuality of the stallion will greatly affect his siring ability.

The breeding stallion should be fed like a horse at hard work. An estimate is 1-1/2 pounds of grain and 1 pound of hay per 100 pounds body weight. If he is worked under saddle, more feed will be required. Because of diverted interests, a ration high in palatability may be necessary for some stallions to get adequate intake. 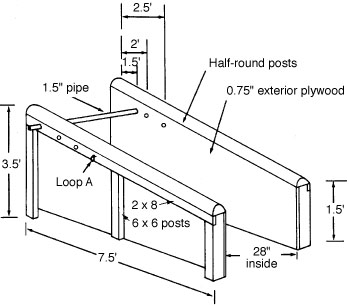 Figure 3:  Breeding stall. A 3/4-inch rope is attached to loop A, brought behind the mare above the hocks, and wrapped twice around the end of the pipe at the mare’s right shoulder. The end of the rope is securely held by an attendant who can release it if necessary in an emergency. 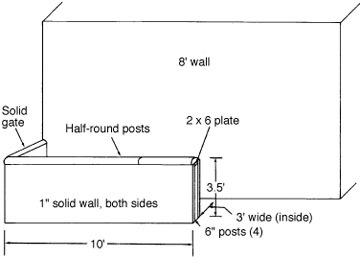 Figure 4: Teasing stall. If stall is positioned against a building, be sure the roof overhang cannot be reached by a rearing horse. A colt pen 20-30 feet in front of the mare is very desirable. It should be easy to see through but should be constructed of mesh wire small enough that a colt’s feet do not go through.

Pasture mating reduces labor, affords convenience to the owner, “catches” shy breeding mares, and creates an opportunity for a high settling percentage. It has the disadvantage of reducing the number of mares a stallion can serve and obscures breeding dates. Some risk to the stallion exists.

Stallions should be hand-mated a few times as 2-year-olds, then turned in a large pasture with a few older mares when they are to be used in a pasture breeding program. Even so, they are likely to carry some scars from their experience. For this reason, pasture mating is seldom used with breeds whose owners discriminate against blemishes, whereas it is extensively practiced with stock horses in the range country.

A combination of hand mating followed by pasture mating will extend the number of mares bred and increase settling percentage. 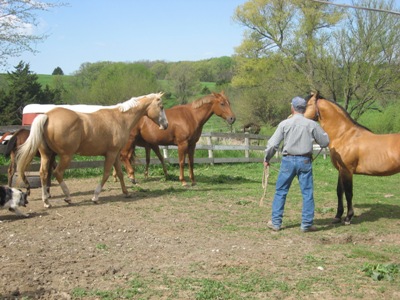 Hand mating is practiced under a wide variety of conditions, ranging from rather casual selection of mares and sanitation conditions to those that are highly supervised with a veterinarian in attendance.

Stallions used with hand mating should be adept at teasing mares. This may be done at a teasing pole, over a stall door, or any other sturdy fixture that does not injure the horses or attendants.

After the mare has been teased and found in heat, she may be hobbled or placed in a breeding stock. Hobbles have the advantage of convenience and safety to the mare but may entail some risk to the operator. Stallions also have been known to become entangled in them.

The mare’s hindquarters may be washed in mild soap and rinsed, and her tail bandaged with a roller bandage. The stallion is allowed to mount quietly from directly behind the mare when ready. A stallion should not be permitted to be rough in the process of breeding. Front shoes should be removed before the breeding season.