Skip to content
Getting a live foal on the ground is only half the battle in getting the baby off to a good start. The second half is the foal’s consumption of colostrum, the dam’s first milk.

Colostrum: The Foal’s Most Important Meal 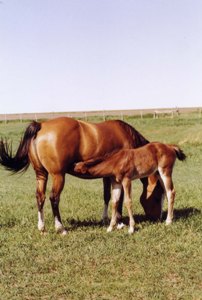 Colostrum is the first milk secreted by the mare immediately before foaling and up to 24 hours after foaling. It contains extremely high levels of antibodies, which are large protein molecules capable of transmitting immunity against disease. Colostrum is nature’s way of allowing the dam to provide her foal with natural immunity. The antibodies can be absorbed through the foal’s intestinal lining for approximately 18 hours following birth. However, as early as 12 hours after birth, the permeability of the foal’s intestinal lining is starting to alter, decreasing in the foal’s ability to absorb antibodies. In addition, the actual level of antibodies in the colostrum declines with time. Researchers have reported a 15 percent reduction in antibody levels in the mare’s milk within four to eight hours after foaling.

Because of the decreased antibody absorption by the foal and decreased antibody presence in the milk, colostrum must be consumed within 15 hours after birth (Figure 1). Foals failing to receive colostrum within this time limit will be more susceptible to infectious diseases. Ideally, the foal should stand and nurse within 30 minutes to one hour after birth. Unfortunately, many horsemen panic and attempt to over assist the newborn by forcing the foal to stand and nurse immediately following birth. Unwarranted assistance at this time will result in a stressful situation and a tired foal. Foals should not be expected to hit the ground running. To the contrary, the foal should be permitted to lie, rest and be nuzzled by the mare for at least 30 minutes after foaling. Under normal conditions, a newborn foal attempts to stand under its own power within 45 minutes following birth. Foals that have not stood and nursed within two hours should be bottle fed colostrum.

When hand feeding sucklings, use a sanitized plastic bottle and nipple. Use either an infant’s milk bottle, with the top of the nipple notched approximately one-eighth inch, or a lamb’s feeder bottle. Thoroughly wash and rinse the mare’s teat area with soap and warm water before hand milking. The washing process will disinfect the teats, limit the possibility of introducing disease to the foal and have a massaging effect on the mare’s udder.

Before offering the foal its first meal, make certain it exhibits a sucking reflex. Stimulate the sucking reflex by gradually inserting your index finger into the foal’s mouth and lightly rubbing the roof of the mouth. With stimulation, most foals will immediately cup their tongue and exhibit the characteristic sucking reflex. When actually feeding the foal, position the bottle and nipple so the foal is forced to suck the colostrum through the nipple. Under no circumstances pour or force-feed the colostrum. Foals that are reluctant to suck or accept bottle feedings may be fed through a tube inserted directly into their stomach. This procedure should be administered only by a qualified veterinarian.

For the first 18 hours, the foal should receive at least 1/4 pint every hour. For the remainder of the first day and through day 13, foals should receive 6 quarts daily spread over eight feedings. The colostrum should gradually be replaced with the dam’s milk.

Because the first milk is critical to the newborn foal, horsemen are encouraged to store colostrum. In areas heavily populated with breeding operations, farm managers can cooperate to form colostrum banks. Members in a colostrum bank donate colostrum from milking mares and store it for future emergency use.

Colostrum should be collected only from heavily producing mares or mares who have lost their foals. Generally, foals consume 4 to 6 ounces of colostrum per feeding. Heavily milking mares produce higher levels of colostrum than the foal is capable of consuming during these early meals. On the average, approximately 5 to 8.5 ounces of colostrum could be hand milked from the mare immediately following each nursing. The hand milking process can be continued throughout the first 15 hours after foaling.

Store the colostrum in sterile, aseptic plastic bags and freeze it immediately after collection. Colostrum can be stored for several months to a year, thus permitting its use during the next foaling season. Before feeding frozen colostrum, gradually warm it to room temperature in a warm water bath not exceeding 110 degrees F. Do not microwave colostrum, and exercise caution not to heat it too quickly. Rapid heating denatures protein and reduces immunoglobulin content. Immediately transfer the warm colostrum to a sanitized plastic baby bottle, allow it to cool and feed it as described earlier.

The immunoglobulin content of the colostrum should be analyzed within hours after birth but before hand milking. Inexpensive, easy-to-use immunoglobulin test kits are available. The kits measure immunoglobulin G (IgG) content in colostrum. Several kits also measure IgG content in serum, plasma and whole blood. These kits are used to test the immunity status of the foal 24 hours after birth. Levels of 800 milligrams per deciliter (mg/dl) are considered to provide the foal with adequate levels of passive immunity. Foals with circulating levels of IgG below 400 mg/dl are considered to have complete failure of passive immunity transfer. Levels above 400 but below 800 mg/dl are considered to have partial failure of passive immunity transfer. Immunoglobulin levels of 800 to 1,000 mg/dl are required for foals in particularly stressful situations. Foals subjected to unsanitary conditions or to many horses entering and leaving the premises will require higher immunoglobulin levels to maintain adequate protection.

In addition to supplying the foal with antibodies, colostrum also contains high levels of vitamins, proteins and energy. It also has a laxative effect on the foal. Bowel movements for the newborn foal are sometimes difficult because of the sticky nature of the first defecation, commonly called meconium. Foals that have difficulty defecating will appear colicky and exhibit labored respiration. An enema is recommended for foals who have not passed the meconium within the first five to 10 hours after birth. Consult your veterinarian before administering an enema.

Unfortunately, the nutrients contained in colostrum also decrease at a rapid rate. Researchers report that mares’ milk proteins and total solids begin to decrease as early as 12 hours after foaling. Table 1 illustrates this dramatic decrease and also compares the mare’s milk at foaling and two months following birth.

Research has shown a rapid decrease in total milk solids, milk proteins and milk yield from the 10th day through the fifth month of lactation. At 30 days of age, foals should be consuming at least 0.4 percent of their body weight daily as creep feed to offset the nutritional deficiencies in the mare’s milk. At 2 months of age, 50 percent of the nutrients must come from creep feed. Proper management of the newborn foal, from the first meal through the first month of lactation, is essential to its future growth and development. Health and nutritional practices employed during this period are key factors in raising a healthy and productive animal.