Skip to content
Foals can be orphaned by a variety of situations: sickness, death, poor milk production and injury to, or disease of, the mare’s udder. Although colostrum consumption within the first 15 hours of life is critical to the foal’s survival, proper nutrition later is equally important to the foal’s growth. 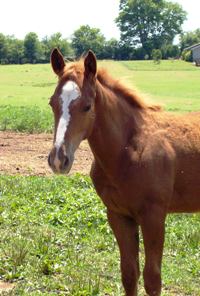 Horsemen faced with raising an orphan foal have two possibilities for providing adequate nutrients. These solutions include bonding the foal to a nurse mare or providing a supplemental milk source using milk replacers. Because the foal’s digestive tract is not yet fully developed and populated with cecal bacteria and protozoa, it cannot digest a solid diet. The foal must therefore consume its nutrients in liquid form. As the foal matures, bacteria will be acquired through the mare’s milk and from fecal bacteria from the mare and other horses.

The easiest and most efficient method of feeding an orphan foal is to use a nurse mare. Select a nurse mare in her first or second month of lactation and give her a thorough physical examination, with special emphasis on the udder. Allow at least one or two weeks for the foster mare to acclimate to the foal. The mare may require physical restraint or tranquilizing during the initial nursing period. Two possible restraints are hobbles or a foster gate that allows the foal to nurse both sides of the mare’s udder. Constructing a foster gate is not economical unless the mare is reluctant to allow the foal to nurse for prolonged periods. 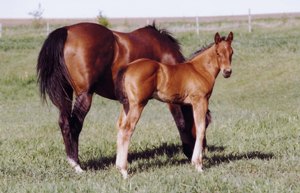 Mares will use their sense of sight, smell and sound to identify their foals. Based on these habits, horsemen have two primary approaches to grafting foals onto nurse mares. One approach involves the camouflaging of the mare’s senses. Several techniques can be used, including impairing the mare’s sight with the use of a hood or reducing her ability to detect odors by introducing a strong-smelling substance such as mentholated petroleum jelly onto the mare’s muzzle. The same substance should be placed on the foal’s forehead, face, neck and tail. An opposite approach to enhancing the mare’s acceptance of a foal involves coordinating her sense of smell with a similar odor on the foal. Using mare’s milk, sweat or feces on the foal’s body helps improve acceptance of the foal.

Because many horsemen do not have access to foster mares, most orphan foals are hand raised. When hand raising foals, do the initial hand feeding with a nipple to ensure proper stimulation of the sucking reflex. Encourage the foal to suck by gently rubbing the roof of the its mouth and tongue with a moistened finger and then introducing the nipple and bottle at an angle. As the foal begins to suck, slowly remove your finger and replace it with the nipple. Nipple feed the foal for four to five days, then offer milk in a bucket.

Locate milk buckets at a level accessible to the foal but not the mare. It is best to place the buckets inside a creep feeder to allow the foal to consume milk continuously. Clean the buckets twice per day and refill them with fresh milk after each cleaning. Contrary to popular belief, supplemental milk need not be warmed.

It is preferable to feed a commercial equine milk replacer to the orphan foal. These supplements are specially formulated to meet the young foal’s nutrient requirements. Avoid using cow’s milk if possible because the nutrient content is not sufficient to meet these requirements. Milk replacers should contain at least 18 to 20 percent crude protein, 15 percent fat and not more than 0.5 percent crude fiber. Feeding rates are listed in Table 1.

If a commercial equine milk replacer is not available, you can use an emergency source until an acceptable milk replacer can be located. Homemade milk replacers are relatively easy to formulate. They generally consist of low-fat cow’s milk (less than 2 percent butterfat content), water, lime water to reduce the incidence of diarrhea and an additive to increase both the energy content and palatability of the milk replacer. Common additives are lactose, sugar or corn syrup. Several milk replacers are listed in Table 2.

Converting to a Solid Diet

Although proper use of equine milk replacers will ensure a normal growth rate, producers should strive to convert the foal’s liquid diet to a solid, high quality creep feed. This dietary change can be started at 1 to 2 weeks of age by offering 1/2 pound of a pelleted creep feed or molasses sweet feed in the creep feeder near the milk bucket. Although foals will initially only nibble at the feed, their consumption will gradually increase. As their creep feed intake increases, provide additional levels of feed so that approximately 1/2 pound is always in the creep feeder. Once each day, replace any creep feed not consumed by the foal. Gradually stop supplementation with milk replacers when the foal is adequately consuming 3/4 pound of creep feed per 100 pounds of body weight. Foals also should have unlimited access to a legume or high quality grass forage.