Skip to content
Horse owners should have a general knowledge of nutrients, how nutrient needs change with different production and use classes of horses, and how to determine if nutrient supply is aligned with requirements. This article provides information related to the different feedstuffs available for horses, as well as evaluating the appropriate ration for individual horses. 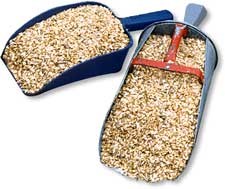 Horses are fed a variety of feeds. Diets range from 100 percent pasture forage to 100 percent completely processed mixes. Most horses are fed forage in the form of hay or pasture in combination with a grain mix. The choice of feed is influenced by the horses’ requirements, availability of pasture, availability and cost of commercially prepared feeds, feedstuffs traditionally fed and use and management of the horses. Nutrients should be supplied in the amount, form and method that safely and efficiently meet requirements. Correctly supplying nutrition to horses requires knowledge of requirements, feeds and nutritional management.

Most horse owners rely on formulated feeds from commercial sources, or on a nutritionist’s support for customer formula mixes. Even so, in order to make accurate decisions, horse owners should have a general knowledge of nutrients, how nutrient needs change with different production and use classes of horses, and how to determine if nutrient supply is aligned with requirements.

Feeds for horses can be divided into forage, grain and grain byproduct, and supplement categories. Tables 1 through 3 provide average nutrient concentrations of different feedstuffs. Feeds displayed are not intended to represent ideal ingredients. The tables are intended to show how nutrient content of different feeds vary. The nutrient content of feedstuffs can be estimated from values reported in feed databases and nutrition texts. Values listed in feed tables are averages. Some feedstuffs are highly variable in nutrient content from source to source, so averages may be of limited value. Accuracy of feed tables will increase when the values represent large numbers of samples on feedstuffs with low variability from source to source.

Feedstuffs can be analyzed for nutrient content at feed testing labs. Testing will be of greater value for large amounts of a feed that will be fed for a long period of time, such as a yearly hay supply. Proper sampling techniques of feeds that are to be tested will increase accuracy of test results, especially with forages. Information on feed testing laboratories and sampling techniques can be obtained with the assistance of local cooperative extension professionals.

Legumes, such as alfalfa, will contain larger concentrations of protein than grass species and generally will have a digestible energy value of 10 percent to 20 percent more than a grass in the same growth stage. Legumes also will contain higher levels of some minerals and vitamins. Improved grass species such as bermuda grass; bluestem; and cool season species like wheat, rye, and ryegrass, will typically contain more nutrients per weight than native prairie grasses. Nutrient levels of pastures and hays identified as prairie and native grass will vary greatly because of the many different grasses that may be represented.

Grains are seeds harvested from plants. Grain byproducts are portions remaining after the removal of certain parts of the grain, for example, the removal of sugar and starch from the grain kernel. Typically, grains are higher in starch and lower in fiber than forages. Barley, oats, corn and milo are four commonly fed grains. The starch, fiber, protein, mineral and vitamin content of byproducts vary greatly. Wheat midds, rice bran, distiller’s grains, beet pulp and soybean hulls are byproducts that are commonly used as portions of grain mixes. Other byproducts, such as soybean meal, are high protein feeds and are used as supplements in grain mixes to increase the protein value of a mix. Feeding of grains and grain byproducts with significant digestible energy values must be regulated as over consumption leads to digestive upset.

Supplements are added to rations to balance specific nutrients or to raise levels of certain substances. Premixes are routinely added to increase protein, mineral and vitamin amounts. Vegetable oil may be added to increase the fatty acid content and to raise the energy concentration. Other ingredients may not have as direct an effect on nutrient balance. These compounds are termed additives and may include compounds with reported health benefits outside of what is known as the nutritional requirements for horses.

Commercially prepared horse feeds typically contain a mixture of grains, grain by-products, high fiber feedstuffs, high protein feeds, minerals, vitamins and additives. Most are designed to be fed in combination with forage and will indicate such on the feed bag. Others are tagged as complete feeds, which are formulated to be fed solely without need for daily intake of forage. Feeds may be formulated to best be fed to specific classes of horses, i.e. mixes formulated to be fed to growing horses may have more protein and minerals per weight of feed than mixes intended to be fed to mature, non-producing horses.

Commercially prepared grain mixes will have a feed tag that contains a list of ingredients and the guaranteed levels of certain nutrients contained within the feed. Nutrient levels are expressed as concentrations in the ration, for example, minimum percent crude protein. If a feed is tagged as 14 percent crude protein, each pound of feed will contain a minimum of 0.14 pounds of crude protein. The list of feed ingredients will provide additional evidence of other nutrients, such as minerals, vitamins and additives not included in the guaranteed analysis of nutrient content.

In order to evaluate how well feeds align with requirements, one must have estimates of the horse’s nutrient requirement and the intake and nutrient content of all the feeds in the diet. Estimates of requirements can be found in textbooks and reports that base values on nutritional research. In practice, energy needs are estimated by feeding levels that maintain horses in appropriate fat cover. Body condition scoring systems are used to index fat cover.

Estimating the intake of a meal-fed diet is fairly simple if there is access to a scale designed to measure weights typical of a rationed diet. Estimating intake from a standard volume, such as a feed scoop or coffee can, is unreliable. Feeds vary in density because of processing and ingredients. Intake of free choice hay can be estimated by observing disappearance over several days and making the assumption that intake is similar between horses when group fed. Estimating intake of pasture is more difficult, as daily voluntary intake of feed varies with horses, feedstuffs offered and environmental conditions.

When forage is unlimited, voluntary dry matter intake is expected to range from less than 1.5 percent to greater than 3.0 percent of body weight per day. Higher intakes are expected when young, growing plants are available. Nutrients in young, growing plants will also be more digestible. Intake and nutrient digestibility also will vary between plant types. In general, plants with higher levels of digestible fiber will be more readily consumed as compared to forages high in cellulose and lignin.

Horses can easily become undernourished when the only source of nutrition is pastures with small supply of forage or only forages that are indigestible. Conversely, diets containing energy-dense grains or access to lush pastures should be regulated by rationing harvested feeds and access to grazing. Overeating leads to excessively fat body condition and increased incidence of colic and founder.

Generally, diets are formulated to meet energy demands when fed at levels around 70 percent to 85 percent of the expected maximum daily dry matter voluntary intake, resulting in as fed dietary intake of grain and hay diets of 2.5 percent to 3.0 percent of body weight per day. Growing horses may consume more as a percent of body weight than mature horses. Diets with feedstuffs low in digestible energy will be fed in larger amounts as compared with diets with higher digestible energy value. Diets formulated for horses with elevated energy needs, such as lactating mares and heavily exercising horses, will be more energy-dense than maintenance diets. Diets with high moisture content, such as immature, small grain forage, will be consumed at larger amounts because of the high percentage of water associated with the forage intake.

To be complete, ration evaluation requires knowledge of horse physiology, feedstuffs and feeding plans. Horse owners are cautioned that mathematical evaluations alone do not account for what can be safely fed under different feeding systems. Nonetheless, there are several routine evaluations that can be conducted in order to check the alignment of the diet with requirements.

The amount of dietary intake and the nutrient densities of that intake should be expressed in the same units, that is, as a dry matter or as-fed basis. When expressed as-fed, the nutrient densities are representative of feed that contains normally occurring environmental moisture levels. Feed tags provide a guaranteed analysis on an as-fed basis. If a tag lists crude protein at 12 percent, each pound of feed that is fed will provide 0.12 pounds of protein.

The other check involves standardizing units of weight. It is common for nutrient requirements to be expressed in metric units, that is, grams, and measurements of amounts fed to be in U.S. measurements,or pounds. There are 454 grams in a pound. If nutrient requirements are provided in metric units, the easiest conversion may be to convert pounds fed to grams. Then, the amounts can be multiplied by the percentage of nutrient of interest and compared to the requirements.

Another frequently needed conversion is converting a nutrient density expressed as a percent to parts per million (ppm), or vice versa. Units expressed as percent are converted to ppm by multiplying the percent of nutrient in decimal form by 10,000. To convert a nutrient density expressed as ppm to percent in decimal form, multiply the ppm by 0.0001. An ingredient listed as 4 percent of the diet equals 400 ppm (.04 X 10,000). Four hundred ppm equals 4 percent (400 X 0.0001).

Example One: Comparing What is Fed with Estimated Requirements

For the second example, determine the change in nutrient density of a ration when 5 pounds of a grain mix are fed with 7 pounds of oats (Table 5). Also, determine the amount of each nutrient that is fed in the final mix.

Adding oats did not alter the crude protein percentage or phosphorus percentage to any significant amount. However, the percent calcium was altered more. The combination of feeds resulted in more phosphorus than calcium being fed, possibly so much that an imbalance of calcium and phosphorus would occur in the total diet.

Many horse owners supplement rations with vitamin or mineral supplements. The third example provides a method for determining the need for vitamins E and D. Vitamin amounts are usually listed as International Units, abbreviated as IU.

In this example, the horse’s requirement is estimated at 800 IU of vitamin E per day. The horse is receiving 15 pounds of hay estimated to contain 11.6 IU vitamin E per kilogram as fed, and 4.5 pounds of a grain containing 160 IU vitamin E per kilogram as fed. The first step is to standardize the weights fed with the listed concentrations. A pound is equivalent to 0.454 kg, so multiply the amounts in pounds by 0.454 to obtain equivalent weights in kilograms. Fifteen pounds is about 7 kg, and 4.5 pounds about 2 kg.