Management of the Mare’s Estrous Period

Palpation and teasing are the two most common management tools used in the detection of heat. Rectal palpation and ultrasonography will help define the time of ovulation, and thus aid in mating management. Parameters of follicular size, follicular consistency, cervical size and consistency, and uterine tone can be monitored through rectal palpation. A mare with a large, very soft follicle that has an open cervix is a prime candidate for breeding. On the other hand, a mare that has no or very small turgid follicles and a closed cervix would be a poor candidate for breeding. Most managers use a combination of teasing and palpation for estrus detection and breeding determination. Mares are teased and those showing signs of estrus are palpated to better define reproductive status. Mares can be individually teased or placed in teasing pens which are constructed to allow for group teasing. Most farms utilize some form of teasing code for record keeping which defines mare receptivity to a teaser stallion. The behavioral signs of estrus include winking of the vulva, urination, squatting, and seeking the stallion. Increasingly, ultrasonography is being utilized for estrus detection and determination of ovulation. With real-time ultrasonography, veterinarians can determine follicular size, early ovulation, uterine changes characteristic of estrus, and abnormalities of the reproductive tract. Ultrasonography is a significant contributor to reduction of the number of breedings or inseminations required per estrus. Each mare responds and acts differently during estrus. Thus, day to day monitoring of teasing status and reproductive tract parameters is essential. 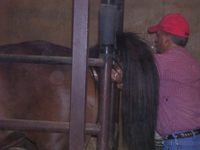 Factors That Can Affect the Mare’s Expression of Estrus

Mares may be protective of the foal and not exhibit estrus. It may require teasing the mare outside the stall away from the foal (the mare may show signs of estrus after the stallion leaves).

Mares that have never been teased before will require additional time to become familiar with the process. In some situations with maiden mares, you may need to lead the mare to the teasing area in order for the mare to learn the process.

Weather or Other Environmental Conditions

Hot or cold temperatures, wind, or precipitation may reduce signs of estrus. Also, the presence of insects may distract a mare and keep her from expressing true estrous behavior.