Aerobic metabolism is dependent on oxygen to break down fuel stores in the horse. Initially, there are limited amounts of oxygen reserves in the body that are present in myoglobin and hemoglobin. These molecules carry oxygen to the muscle and other tissues. However, these oxygen stores only last a few seconds to produce limited amounts of ATP. Inhaled oxygen during aerobic exercise is carried to the muscles and liver to metabolize carbohydrates and fats for the production of ATP. The end products of aerobic metabolism are carbon dioxide, water, and heat:

Is this also an anaerobic event? Well, yes and no. Any event that lasts greater than one minute uses both anaerobic and aerobic metabolism to produce ATP. 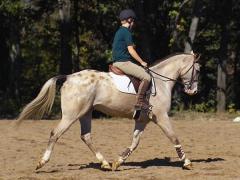