The goal of every horse breeder is to produce genetically superior horses. Because there are so many environmental conditions which affect the horse, it is difficult to evaluate the genetic potential. A gifted breeder is able to select superior horses for mating, and manages the environmental affects, such as nutrition, health care, training and injuries, to maximize the horse’s genetic potential. Since breeding for quality horses is not a simple matter, breeders must understand basic genetic principles and their application to be successful in the horse business. 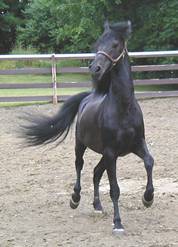 The most important aspect of developing a good breeding program is the selection of outstanding breeding stock. Identifying genetically superior breeding stock is accomplished by using individual records, pedigree records and progeny information.

With high heritability traits, the individual record is a good indication of the horse’s breeding potential. By selecting an outstanding individual based on its records, the probability of passing those genetics onto the next generation is quite good, as high as 40 to 60 percent in many traits of economic importance to horses.

Breeders should also look at the horse’s pedigree. Horses that have an outstanding sire and an outstanding dam have a higher probability of favorable genes for those desired traits. The pedigree will give some indication of the genes that have been passed on and shows the prepotence or the concentration of the quality genes in the individual.

If the mare or stallion has produced offspring, the offspring are the truest estimate of the horse’s potential. Breeders should look at the average of all of the offspring that have been produced, not just one particularly outstanding offspring. If a horse has produced 10 or more offspring, in the case of the stallion, the average quality of those offspring indicate the genetic potential of the horse. However you must consider that if one offspring is particularly outstanding, it could be a result of the mare more than the stallion. Progeny averages on a number of offspring are the best indication of horse’s genetics and a good predictor of breeding success.

The rates of progress that a breeder makes in a breeding program are dependent on four things:

Breeding programs have become so specialized (racing, halter, cutting, pleasure, etc.) that the all around horse cannot be competitive in any event. Therefore, breeding programs must be focused on a single goal to be successful. The goals of a breeding program should be economically important, genetically sound, consistent and focused on the market. A breeder should select for as small a number of traits if possible to maximize progress. Many traits are related, such as speed which is highly related to conformational traits such as balance an leg structure. Thus selecting for athletic ability usually results in good conformation.

As previously indicated, heritability is the second aspect of genetic progress. Heritability is relatively high in most traits of economic importance; therefore it is not a limiting factor in most breeding programs.

Selection intensity is simply the amount of selection pressure applied for a particular trait. In other words, the difference between the horses you selected and the average of the breed. It is extremely important to select the highest quality individuals that are available, because the higher the superiority of the selected horses, the greater the improvement that can be expected in the foals. Selection of high quality mares is equally important as selection of the stallion, even though as stallion has a greater genetic input in the herd.

The generation interval is simply the length of time it takes to replace all the mares and stallions in a herd. The shortest period of time required for a mare to produce a female to replace herself will be approximately four years. In reality, selecting the best mare in your herd for replacement and getting them into production requires a generation interval of 6 to 7 years.

In practice, many breeders maintain the same group of broodmares and stud for 10 to 15 years not realizing that they have made all the improvement possible after the first year. The goal should be to get the female offspring of mating age back into the breeding herd as soon as possible. In order to be a leader in this dynamic horse industry, a breeder must continually improve the quality of their herd.

A progressive breeding program must take advantage of these genetic principles in order to be successful. Progressive breeders should start with the best mares and stallions affordable.

The plan should be to produce 3 to 4 foals out of each mare and then replace the mare with her best filly. Any mares that do not produce or produce low quality colts should be eliminated from the breeding herd. A second stallion must be selected to breed to the new fillies that are used as replacements.

By taking advantage of the superior genetic potential in the foals produced and utilizing them in the breeding herd as quickly as possible, maximum genetic improvement will be achieved. 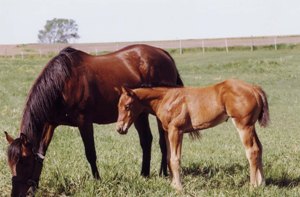