Fall management of broodmares is far more critical than some breeders realize and can directly impact foaling and re-breeding successes next year.

Most foals are weaned between four and six months of age. Depending on foaling date, weaning can occur in late summer or early fall. If there are several foals, owners may wait until the younger foals are at least four months old to wean all foals at the same time. On large breeding farms, weaning may occur over several weeks to accommodate the difference in ages of the foals. 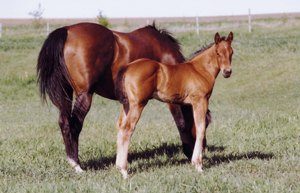 Weaning has been shown to be stressful to foals. Foals average daily gain decreases after weaning. Foals rebound from the stress of weaning in 10-14 days. Mares are also stressed at weaning but to a lesser extent than their foals.

A major management factor after weaning is getting lactating broodmares dried-up as rapidly as possible. Mastitis is not a big problem in mares, but a few mares do have mastitis.

It is not advisable to milk out mares after weaning. Milking out a mare only stimulates her udder to continue producing milk and prolongs the drying-up process. By not milking out mares, the natural process will result in mares drying up more rapidly and being less stressed.

Maresʼ udders will be swollen, hot and feverish. If mares are uncomfortable, owners can use camphorated oil or udder balm, commonly applied to cowsʼ udders, to relieve their hot, swollen udders.

It is advisable not to feed grain to mares during the drying-up process. Eliminating grain feeding of mares a week before weaning may also be helpful. Even if mares are thin, (See: Body Condition Score), there is adequate time to properly condition these mares before they will foal and be re-bred next spring.

Exercise is also important in helping the mare dry-up properly and rapidly. Mares should not be kept in stalls after their foals are weaned. Mares can be placed on lower- quality pasture that requires more time to graze. Mares not fed grain or hay will spend more time grazing, thus exercising more, which aids in the drying-up process.

Is she still pregnant? 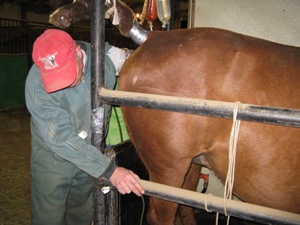 Pregnancy checking in the fall by palpation<

Owners can more properly manage mares by pregnancy checking them in the fall. Even mares that were pregnant at 14-18 days and at 40 days post-breeding should be reexamined in the fall. If mares were not pregnancy tested previously, it is suggested that they are checked in the fall. Fall pregnancy checking is a wise investment and pays extra dividends in saving feed and labor cost and results in healthier foals next year. While fall pregnancy testing is always important, it is critical when fall pasture is poor, there is a shortage of good-quality hay for winter feeding or feed prices are higher than normal.

Classification of mares as pregnant and non-pregnant allows owners to fine-tune their management. Pregnant and non-pregnant mares need to be managed differently in the fall and winter. Feeding is one key area. There often is a tendency to feed all mares the same type and amount of feed. Barren mares require only a maintenance ration; whereas, pregnant mares need precision-managed feeding during their second and third trimesters.

One of the major advantages of fall pregnancy checking is the identification of mares that were previously pregnant and are now barren. Barren mares are often not given proper attention until late winter or spring just before being bred. This is a good time to correct some reproductive problems which may help get mares pregnant in the next breeding season. Fall is the time to make specific management decisions and actions regarding barren mares.

Barren mares selected to remain in the breeding herd may benefit from a uterine biopsy. A uterine biopsy of the mareʼs endometrium, lining of the uterus, will indicate the probability of her conceiving and maintaining a pregnancy. Mares with a Grade III biopsy are not likely to maintain a pregnancy. The best time for a uterine biopsy is in the fall after the breeding season and before mares begin transition into winter anestrus. Do not biopsy pregnant mares.

Breeders must decide whether they are going to keep or cull barren mares. Mares 16 years of age and older decline in their ability to maintain a pregnancy. Older mares become pregnant at about the same rate as younger mares, but fewer will be pregnant at 40 days post-breeding and in the fall.

Two key factors help breeders make this decision. Is the mare an economical producer; in other words, are her foals profitable, and is she a genetically superior producer? Any mare that is not an economical producer certainly must be considered for culling. Those that produce below-average-quality foals will not contribute to a breederʼs success.

Artificial Lights in the Fall

Barren mares with high probability of maintaining a pregnancy need to be managed to have the greatest possibility of becoming pregnant next year. This includes proper nutrition, body condition, health and reproductive management. It is advisable to place these mares under artificial lights in November or at least by the first of December. Artificial lights will cause these mares to come into estrus about eight weeks after being placed under them and be ready to be bred about 30 days later. The advantage of this process is the barren mare can be mated earlier and more often during the breeding season which enhances her chance of becoming pregnant. Mares placed under lights in November have one or two estrous cycles to combat infections and eliminate difficult problems before being bred.

Placing pregnant mares due to foal in March and April under artificial lights will shorten the length of their gestation by 10 days. By foaling earlier, they can be re-bred sooner in the breeding season.

Body condition is stored body fat. Stored body fat is used later by the broodmare as an energy source for the rapidly growing fetus in late pregnancy and for milk production in early lactation. Because of the large size of the fetus, it is difficult for pregnant mares to consume adequate feed to meet both the nutritional needs of the fetus and the mare herself. The fetus has first priority over feed nutrients. The fetus makes 75 percent of its growth in the last trimester. Early lactation has a greater nutritional demand than late pregnancy.

Mares will store body fat until about 270 days of pregnancy. After which, their BCS will decline slightly as the stored fat is used for fetal growth. This decline continues into lactation, especially if the mare is a good milker. Lactating mares tend to lose body condition during the first 120 days of milk production.

It is possible to add one BCS unit to a mare in 30-45 days. Heavy grain feeding increases the risk of colic and laminitis. Caution and good judgment are required in this process. Mares need to be in the proper body condition desired at foaling (5.5-7.5) at the start of their third trimester. 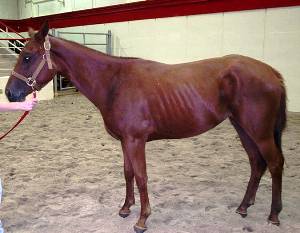 In the fall, mares of a BCS of 4 or less need to be fed to increase their weight.

Mares with a BCS of 5.5 to 7.5 foal without problems and are easier to get pregnant than mares that are thin with a BCS of 4 or below. There is no reason for broodmares to have a BCS of 8 (fat) or 9 (obese). These fat mares do not milk as well, and their foals do not grow as rapidly as mares in a moderate BCS range of 5-7.5.

No detrimental breeding problems occur in mares with a BCS higher than 7.5; however, these fat mares are at greater risk of colic and laminitis, and it is not economically good management to have them above a BCS of 7.5. Many non-pregnant mares will have a BCS of 5-7.5. They must be managed in the fall and winter to maintain this level of body condition without getting fatter. Non-pregnant mares with a BCS of 8-9 in the fall should be placed on a diet to reduce their BCS to at least a 7.5. Owners have several months before the breeding season to accomplish this feat. These mares should be on lower-quality fall pasture without grain. In winter, they should be fed an average or slightly lower-quality hay without grain.

Pregnant mares can be further subdivided depending on when they will foal. Mares that foal early in the year, especially if they have a BCS of 4 or less, need immediate intense management to increase their body condition before foaling. Likewise, overfat mares (BCS 8 and 9) need critical management. If they foal early in the year, they should be managed so as not to gain any more body condition.

It is not advisable to have mares lose body condition in their last trimester. If fat mares (BCS 8 or 9) are early in their pregnancy, owners have time and options to better manage them. Use of pasture and forage with little or no grain could result in these mares reducing to a BCS score of between 7.5 to 6 when they foal. These mares can graze on lower-quality fall pasture without grain so they will be nearer a body BCS of 7.5 at the start of their last trimester.

As noted, careful nutritional management of broodmares is important in the fall and winter. The general tendency is for broodmares to be overfed. Allowing mares to get too fat in early pregnancy is a definite problem. Mares that do not milk well and those that are not pregnant have a tendency to be too fat. 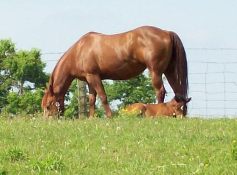 This may not be the case if pasture is limited or of poor-quality. Mares may require some grain to maintain their body condition. Always feed the smallest amount of grain to accomplish the nutrition level required.

Thin mares or those on lower-quality fall pasture may require an increase of 10-15 percent in grain fed above their nutrient needs. Non-pregnant mares can be well maintained on good-quality pasture alone. Different nutrient needs are the reason that pregnant and non-pregnant mares should be managed separately. The best-quality pasture should be reserved for weanlings.

Astute mare owners know the reproductive and lactational histories of their mares. Mares that are known to be heavy milkers can be preconditioned in the fall and winter. These mares can have a BCS of about 7.5, since heavy lactation will reduce their body condition.

While the mare can store body fat for later use, she has little reserves of protein that can be used for fetal growth and/or milk production. In the second and last trimester, from 111 days to foaling, protein intake is important. The total ration should contain 10-12 percent protein, especially in the 9th, 10th and 11th months of pregnancy. If legume forages are fed, a 10-12 percent protein grain mix is adequate. One should feed a 12-14 percent protein grain mix with grass hays. Since the mare cannot store much protein, feeding a 16 percent protein ration is not recommended during pregnancy. Proteins are made up of a series of amino acids. Protein quality is having the correct amounts of essential amino acids in proper ratios to each other. Research indicates that protein quality may be more important in early pregnancy than was previously thought. A high quality protein such as soybean meal, alfalfa hay or milk by-product sources should be fed in the last three months of pregnancy as well as in early lactation.

It is important that all mares have an adequate source of clean, fresh water and trace mineralized salt at all times.

Mares are normally vaccinated in the spring for the common horse diseases. Equine herpesvirus Type 1 causes virus abortion, which is the single most important infectious cause of abortion. Pregnant mares should be vaccinated for Rhinopneumonitis (virus abortion) in their 5th, 7th and 9th months of pregnancy. Depending when a mare became pregnant, possibly the 5th, probably the 7th and certainly the 9th month of pregnancy will occur in the fall or winter.

Kubiak, J. R., et. al. 1987. The Influence of Energy Intake and Percentage of Body Fat on the Reproductive Performance of Nonpregnant Mares. Theriogenology. 28:587.