Skip to content
A healthy, frolicking foal is the result of a well-designed broodmare management program. Although many other factors are involved in the total breeding program, without basic broodmare care and management, conception is much more difficult. By following the discussed broodmare management practices, your chances of producing a live, healthy foal are significantly increased.
Volumes of material have been written on broodmare management. However, much of the material is extremely detailed and is of little use to the average horse owner who wants to breed a mare. There is a need for a common sense approach to managing the broodmare. This common sense approach, combined with scientific management principles, will allow for a successful breeding program. This paper will address basic principles related to management of broodmares, including condition scoring, herd health, lighting programs, the estrous cycle and receptivity to breeding.

A mare is referred to as seasonally polyestrus. That means mares will have heat cycles many times during a particular season. Mares typically begin to cycle in early spring and continue to cycle through the early summer months. It is well documented that cycling starts as a response to increased photoperiod (light). Therefore, by altering the amount of light the mare is exposed to each day, horse owners are able to extend the length of breeding season. Extending the horse’s perception of day length by extending the natural daylight with artificial sources is not a new management technique. It is a tool that both horse breeding farm managers and horse trainers have used for many years. Those involved with showing their horse will keep their horse’s hair coats short by using extended lighting programs since hair coats are shorter during the long daylight times of year. Those involved with breeding will place open mares under lights to quicken the beginning of the breeding season. 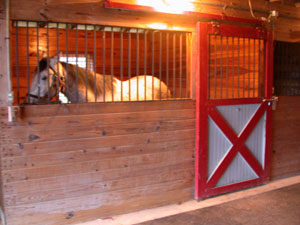 Horses need at least 14.5 hours of total light to perceive long days. The tried and true program is to provide artificial light so the total light period (daylight and artificial) is 16 hours in length. Automatic timers that will turn on 30 minutes before sundown and stay on for five to six hours to achieve the recommended 16 hours of total light and eight hours of dark. If sunrise is at 7 a.m., lights need to go off at 11 p.m. The light source can be incandescent, florescent or halogen. The intensity of light at the level of the mares head should be 2- to 10-foot candles using a light meter.

It takes a while for the lighting effect to work. Once started, it will be 60 to 90 days before mares cycle normally. It will take about 30 to 45 days for mares to make the transition and an additional 20 to 30 days to go through a heat cycle. Beginning a lighting program in late November or early December should allow for late February breeding. Mares will most likely show behavioral signs of heat before this time, even though they do not actually go through an ovulatory cycle.

Early season cycles tend to be erratic. Therefore, the use of ultrasound and palpation increases the chance of determining if and when a mare has ovulated. Routine is important, as lights need to come on every day. Leaving the lights off for several days reduces the effect of a lighting program. Also, the mares need to stay under lights until they are bred or the natural daylight is lengthened with the changes of season. Therefore, do not stop the lighting programs too early in the breeding season. An added effect of a lighting program is that mares will start to shed hair, which may result in additional shelter needs.

It is very important to put the lights on an automatic timer. Do not depend on someone to turn the lights on and/or off at the correct time. The light program is used not only on open mares but also on pregnant mares and mares that have already foaled. 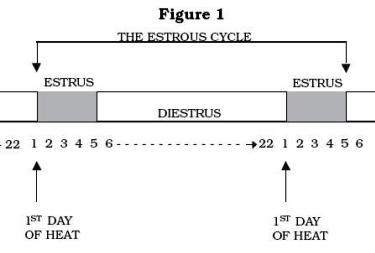 Figure 1: The estrous cycle of a mare.

Most reproductive physiologists define the complete cycle as the amount of time from the first day of heat until the first day of the next heat period. In an ideal world, this would be a 21-day cycle. The estrus portion of the total cycle is the period of receptivity to the stallion. During this time, typically about five days, a follicle is rapidly developing in the ovary and will be released during the latter stages of estrus. Therefore, the time to breed in the estrus cycle is mid- to late-estrus.

The primary reason for the variability of the estrous cycle is season of the year. Estrous cycle patterns are classified according to seasonal variation. Diestrus is that portion of the estrous cycle in which the mare is not in heat. The anestrous period is the time of sexual rest and cessation of most ovarian activity. This is during the late fall and winter months, although location will affect the length of anestrous period.

After the horse owner has a working knowledge of the estrous cycle, it is then necessary to determine the stage of receptivity the mare is in relative to the total estrous cycle. This can be done by rectal palpation, ultrasound and the use of a teaser stallion. Most breeding farms use a combination of these methods. Good records are a must in horse breeding, as they are necessary in managing mares so they will be bred in a timely manner. This objective is directly related to the ultimate success or failure of the business. The following heat intensity scoring system is used by several breeding operations.

Score of mare on Heat Intensity (1-5)

This system is very useful because it gives the horse breeder more precise information than can be gathered by simply observing whether or not the mare is showing signs of heat.

Depending on results of the teasing, a mare may or may not be palpated or examined by ultrasound. Mares can be teased by leading the stallion in front of stalls and paddocks or by placing the stallion in a small pen in the center of a paddock full of mares. In the latter situation, the mares will go over to the stallion, and the stallion manager can observe closely and make notes. Some mares, although they are in heat, will never challenge other mares for a place around the stallion’s pen. This is due to their position in the dominance hierarchy of that group of mares.

Horse owners have begun to pay more attention to the horse breeding business. Many started with a pasture breeding program, advanced to hand mating and now, in many instances, are using artificial insemination and even embryo transfer. Horse owners realize that they do not have to accept poor conception and low foaling rates as a fact of life. Moreover, they are becoming more and more educated in the total field of equine science. Many universities have established horse curriculums to meet the demands of horse-oriented students.

Horse breeders have established controlled breeding programs. Using more sophisticated record keeping systems and breeding methods, the breeders have a better understanding of mare reproductive physiology. For breeders, the governing factors for management decisions are knowing the cycle and when ovulation occurs, and then to breed or artificially inseminate accordingly.

Although many other factors are involved in the total breeding program, without basic broodmare care and management, conception is much more difficult. By following the discussed broodmare management practices, the chances of producing a live, healthy foal are significantly increased.

For more information on basic broodmare care and management, watch this video from our eXHorses YouTube Channel.